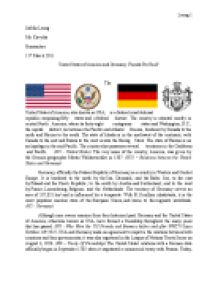 ï»¿Leong JiaMin Leong Ms. Kavytha Humanities 11th March 2011 United States of America and Germany: Friends For Real? The United States of America, also known as USA, is a federal constitutional republic comprising fifty states and a federal district. The country is situated mostly in central North America, where its forty-eight contiguous states and Washington, D.C., the capital district, lie between the Pacific and Atlantic Oceans, bordered by Canada to the north and Mexico to the south. The state of Alaska is in the northwest of the continent, with Canada to the east and Russia to the west across the Bering Strait. The state of Hawaii is an archipelago in the mid-Pacific. The country also possesses several territories in the Caribbean and Pacific. (W1 - United States) The very name of the country, America, was given by the German geographer Martin Waldseemüller in 1507. (W12 – Relations between the United States and Germany) Germany, officially the Federal Republic of Germany is a country in Western and Central Europe. It is bordered to the north by the Sea, Denmark, and the Baltic Sea; to the east by Poland and the Czech Republic; to the south by Austria and Switzerland; and to the west by France, Luxembourg, Belgium, and the Netherlands. The territory of Germany covers an area of 357,021 km2 and is influenced by a temperate. ...read more.

By the time America achieved independence, Germans, who were scattered throughout the nation, comprised about 9 percent of the population. In the nineteenth century they continued to arrive by the thousands. (W8 - Germany-U.S. Relations) Though the United States and Germany has started out in a sour relationship, it is no doubt things have changed dramatically over the past few decades because today, the United States is regarded as one of the Federal Republic of Germany?s closest allies and partners outside of the European Union, this creates a question we?ve all been wondering: How does one sustain a friendship? Starting a friendship may be a start, but maintaining it is a different story. Each country will play a vital role in sustaining their friendship. The key to maintaining a friendship or relationship between countries is to adapt mutual understanding and tolerance towards each other. Problems shall be solved is a peaceful manner and violence should not be needed. President Barack Obama and Chancellor Angela Merkel meet for bilateral talks in Baden-Baden, April 3, 2009 (I4 - History of German-American Relations) Presently, U.S. policy toward Germany remains the preservation and consolidation of a close and vital relationship with Germany, not only as friends and trading partners, but also as allies sharing common institutions. During the 45 years in which Germany was divided, the U.S. ...read more.