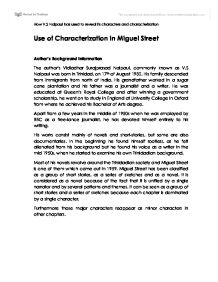 Use of Characterization in Miguel Street

Use of Characterization in Miguel Street Author's Background Information The author's Vidiadhar Surajprasad Naipaul, commonly known as V.S Naipaul was born in Trinidad, on 17th of August 1932. His family descended from immigrants from north of India. His grandfather worked in a sugar cane plantation and his father was a journalist and a writer. He was educated at Queen's Royal College and after winning a government scholarship, he went on to study in England at University College in Oxford from where he achieved his Bachelor of Arts degree. Apart from a few years in the middle of 1950s when he was employed by BBC as a free-lance journalist, he has devoted himself entirely to his writing. His works consist mainly of novels and short-stories, but some are also documentaries. In the beginning he found himself rootless, as he felt alienated from his background but he found his voice as a writer in the mid 1950s, when he started to examine his own Trinidadian background. Most of his novels revolve around the Trinidadian society and Miguel Street is one of them which came out in 1959. Miguel Street has been classified as a group of short stories, as a series of sketches and as a novel. It is considered as a novel because of the fact that it is unified by a single narrator and by several patterns and themes. ...read more.

Bogart Bogart is the first character that the readers are introduced to. He has no identity and it is ironic how his mysteriousness is accepted unquestioningly by the people of Miguel Street. No one really knows about Bogart, not even his real name. He was first named Patience just because he plays a card's game called Patience all day and then he is given the name 'Bogart' because of his resemblance to an actor in a movie called 'Casablanca'. He comes to Miguel Street from somewhere and becomes the most popular man in the street at one point as the narrator boy says on page 11 "He was at one time quite the most popular man in the street". Bogart creates a fake identity of himself in Miguel Street and never tells anyone about his real story, about his problem or conflict that he is facing. In fact he goes way out of his real life into fantasy which is apparent when he explains where he had disappeared to, on page 14 "He had got a job on a ship and had gone to British Guiana. There he had deserted, and gone into the interior. He became a cowboy on the Rupununi, smuggled things into Brazil, and had gathered some girls from Brazil and taken them to Goergetown. ...read more.

He even paints his house a bright green and red as though to express his new-found character. Eventually, his wife returns, takes up her old employment and Popo reverts to the old life of making the thing without a name. However he is arrested and jailed for three years for stealing the furniture and the paint. So the reader and the other characters in Miguel Street get to see the real character of Popo. Everyone finds out that he is not a carpenter at all which is apparent as he stole all the furniture which he claimed to have made it himself. It is also apparent that he is not a carpenter and he was just calling himself a carpenter to enjoy the status of a working man. As you see when the narrator boy makes the sign board for Popo, on page 18 the narrator boy says "At first he wanted to announce himself as an architect; but I managed to dissuade him. He wasn't sure about the spelling. The finished sign said: BUILDER AND CONTRACTOR CARPERNTER AND CABINET-MAKER" "Popo liked standing up in front of the sign. But he had a little panic when people who didn't know about him came to inquire" He would simply say "The carpenter fellow? He doesn't live here again". That is how he is seen until his conflict comes up. ?? ?? ?? ?? How V.S Naipaul has used to reveal its characters and characterization ...read more.