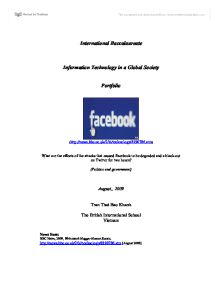 What are the effects of the attacks that caused Facebook to be degraded and a black-out on Twitter for two hours?

International Baccalaureate Information Technology in a Global Society Portfolio (http://news.bbc.co.uk/2/hi/technology/8190786.stm) What are the effects of the attacks that caused Facebook to be degraded and a black-out on Twitter for two hours? (Politics and government) August,, 2009 Tran Thai Bao Khanh The British International School Vietnam News Item: BBC News, 2009, Web attack blogger blames Russia, http://news.bbc.co.uk/2/hi/technology/8190786.stm [August 2009] A. PRESENTATION OF THE ISSUE The article "Web attack Blogger Blames Russia" on BBC website attracted my attention to an attack of an activist Georgy, whose nickname was Cyxymu, to sites such as Facebook, Twitter, and Google. However, Cyxymu claimed that he was aimed at the attack not the one that was attacking, and Russia was behind all this as the government did not want the public to know what they did to Georgian people, since the blogger just wrote the truth about the Russian-Georgian war, which started a year ago, and all the sites where he had his blogs and videos posted on were "attacked" (Twitter, Facebook, Live Journal, and Google). ...read more.

For usual connection, the server verifies the request and allows the users to get the access, however, in case of DoS, the monitor sending the request will be controlled by the attackers who try to "flood" the server with a lot of "requests" making it not being able to process them. DoS attacks can only happen when there is internet connection. According to Brandee Barker, no user data was damaged or lost. In conclusion, the whole purpose of attacker carrying out DoS attacks to Facebook and Twitter was to prevent Cyxymu getting on the website, as usually, the no damages were caused. C. THE IMPACT OF THE ISSUE Denial-of-Service attacks only benefit the attackers. According to this article, if the attacker was really the Russia Government, by applying the DoS attacks to those websites that Cyxymu was trying to get on, stopped and prevented the access of the blogger to the blogs so that he could not continue his "offended" blog about Russia in order to protect its reputation. ...read more.

D. A SOLUTION TO A PROBLEM ARISING FROM THE ISSUE Facebook and Twitter should have automatic back-up as the safety barrier, and if the attacks happen, websites should put the announcement, like what Twitter did, on their homepage since they cannot log into the sites. By doing that, the owners of the websites let users know what is going and they will be calmer and at ease. Installment and maintaining anti-virus software and firewall are also ways to prevent Denial of Service attack as well as setting up a filter, which will lock the data before it reaches the server, then it will check for errors by detecting the patterns contained in the data. In addition, firewalls can allow and deny protocols, effectively stop users from getting simple flooding type attacks. Denial-of-Service attacks also violate regulations within some countries, for example, in the United Kingdom, there has been the "Police and Justice Act 2006" to restrict the Denial-of Service attacks, and the penalty for violation is 10 years in prison. ...read more.