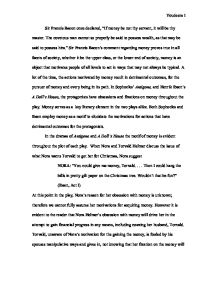 Sir Francis Bacon once declared, "If money be not thy servant, it will be thy master. The covetous man cannot so properly be said to possess wealth, as that may be said to possess him." Sir Francis Bacon's comment regarding money proves true in all facets of society, whether it be the upper class, or the lower end of society, money is an object that motivates people of all levels to act in ways that may not always be typical. A lot of the time, the actions motivated by money result in detrimental outcomes, for the pursuer of money and every being in its path. In Sophocles' Antigone, and Henrik Ibsen's A Doll's House, the protagonists have obsessions and fixations on money throughout the play. Money serves as a key literary element in the two plays alike. Both Sophocles and Ibsen employ money as a motif to elucidate the motivations for actions that have detrimental outcomes for the protagonists. In the dramas of Antigone and A Doll's House the motif of money is evident throughout the plot of each play. When Nora and Torvald Helmer discuss the issue of what Nora wants Torvald to get her for Christmas, Nora suggest NORA: "You could give me money, Torvald. . . . Then I could hang the bills in pretty gilt paper on the Christmas tree. ...read more.

Despite Creon not being the person who committed the crime, or is not one being accused of being bribed, his statement is relevant in many ways. His lack of faith in the sentry's word and the fixation upon the bribery will eventually cause him a loss that he will be too late to pay back. Thus his motivation, which is his disgust of financial bribes, causes him to question everything and in turn loose sight of the grand scheme of events. As seen in both plays, money is employed as a motif to reveal the motivations for actions of the protagonists. Moreover, as both plays progress, the motif of money is further developed and it is much clearer to the reader that the financial motivations, proved to have actions that's results in detriment. As Nora's initial fixation upon money is very curious to the reader, it is discovered later why Nora acts the way she does, in another conversation with Ms. Linde Nora remarks, NORA: Whenever Torvald has given me money for new dresses and such things I have never spent more than have of it. Nora's motivation for acquiring such financial wealth is hinted at in this conversation with Ms. Linde. The reader is partially opened up to why Nora acts the way she does towards money. ...read more.

Creon's later pays for his blatant disregard of the prophecies given. Later in the same conversation after the prophet insists he has not been paid off and wishes to speak his prophecies, Creon replies, CREON: Well, touch it then. But to not speak as you've been paid to do. It is elucidated through this comment by Creon that he cannot seem to look based the so called financial bribe that the prophet possibly received. Creon yet again blatantly disregards the prophecies because of his fixation on the bribe that the prophet could have possibly received. His fascination with the bribe doesn't allow him to realize the prophecies reveal his future and ultimately the future of his family. Both plays contain the motif of money that displays motivation for actions of protagonists. Sir Francis Bacon's statement regarding the effect money has upon its holder proves somewhat evident in the literature of Sophocles' and Ibsen. Both authors utilize money as a motif to reveal the motivations for the protagonist's actions in both plays which have detrimental outcomes. In both plays alike, different forms of money form as motivations for the way the characters act. In the case of the two plays, A Doll's House and Antigone, the actions done by the protagonist end in much detriment. ?? ?? ?? ?? Youdeem 1 ...read more.