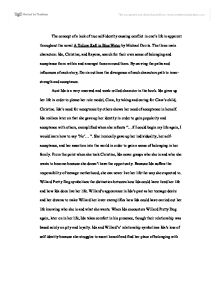 The concept of a lack of true self-identity causing conflict in one's life is apparent throughout the novel A Yellow Raft in Blue Water by Michael Dorris. The three main characters: Ida, Christine, and Rayona, search for their own sense of belonging and acceptance from within and amongst those around them. By carving the paths and influences of each story, Dorris outlines the divergence of each characters path to inner-strength and acceptance. Aunt Ida is a very reserved and weak-willed character in the book. Ida gives up her life in order to please her role model, Clara, by taking and caring for Clara's child, Christine. Ida's need for acceptance by others shows her need of acceptance in herself. Ida realizes later on that she gave up her identity in order to gain popularity and acceptance with others, exemplified when she reflects "...if I could begin my life again, I would learn how to say 'No'... ". She ironically gave up her individuality, her self-acceptance, and her assertion into the world in order to gain a sense of belonging in her family. ...read more.

She obsesses over soap operas because she can find comfort in knowing every character's role. Christine, being a young, rebellious, and adventurous individual, recognizes Ida's lack of perseverance in self appraisal as a hindering obstacle. Christine transfers Ida's take on life to the extreme opposite. In place of distraction, ignorance, and submission, Christine decides to discover her own sense of belonging by sampling each identity around her. First, Christine attempts to be a daring and courageous girl to impress her way into acceptance. Next, she steers into religion and faith, then sociable promiscuity. Though each instance Christine tries out a new identity, she isn't looking for acknowledgement within herself, but rather for popularity or belonging with others. Christine turns to Lee, Dayton, Elgin, Ida, and even Rayona to come to terms with herself. In doing so, she deepens her own lack of self-identity. Rayona, however, had the largest impact on Christine's search. "Rayona gave me something to be, made me like other women with children. ...read more.

Not only does her independence send into a search for self-identity, her physical appearance does as well. She describes herself as being "too light to be black and too dark to be Indian." Indisputably, Rayona's heritage procures a significant inner conflict of indefinite identity. Also, Rayona justifies Elgin and Christine's irresponsibility to others, and most importantly to herself, by declaring her father as an airplane pilot, or her mother and father on vacation. These lies bring an undeniable escape to Rayona's life, whether she truly believes in them or not. Unlike Ida and Christine, Rayona later comes to terms with her true identity. By throwing away Ellen's letter, Rayona is throwing away her need to escape into acceptance and acknowledging comfort in her identity as Christine's daughter. Michael Dorris reiterates the idea of self-identity into each of the three stories in A Yellow Raft in Blue Water. Ida, Christine, and Rayona all struggle with their own self-identity and sense of belonging, causing conflict to arise throughout the plot of the novel. In relation to society, an individual must be confident in their self-worth, value, and character to embark on a trouble-free life. ...read more.