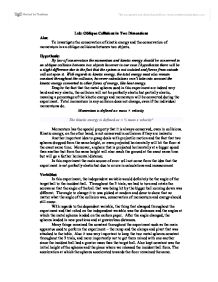 By law of conservation the momentum and kinetic energy should be conserved in an oblique collision between two objects however in our case I hypothesize there will be a slight difference due to the fact that the system is not isolated and forces from outside will act upon it.  With regards to kinetic energy, the total energy must also remain constant throughout the collision, however calculations won’t take into account the kinetic energy converted to other forms of energy, like heat energy.

Despite the fact that the metal spheres used in this experiment are indeed very hard and very elastic, the collision will not be perfectly elastic but partially elastic, meaning a percentage of the kinetic energy and momentum will be converted during the experiment.  Total momentum in any collision does not change, even if the individual momentums do.

Momentum is defined as: mass × velocity

The kinetic energy is defined as = ½ mass x velocity²

Momentum has the special property that it is always conserved, even in collisions. Kinetic energy, on the other hand, is not conserved in collisions if they are inelastic

Now that we have our velocity and mass for our initial incident ball, we can find the momentum of the system by the formula p = mv

In this case, the incident ball hit the target ball head on, giving the following results

In this case, the incident ball hit the target ball at an angle (65º), giving the following results

The sources of error in this experiment included several factors.  First of all, only one trial was performed for each of the procedures increasing the likelihood of a mistake.  The kinetic energy lost to heat could not actually be found and added on to the final KE making some of the statements about the final KE false.  Also concerns arose about the accuracy of measurements since we had several problems with measuring angles and distances from the point of impact to the points of landing, and often times we had to round digits greatly.  The paper itself on which we recorded the results was often accidentally shifted which caused another error to the distances.

If granted another opportunity to repeat this experiment, I would certainly change some things.  I would perform more trials for each of the procedures and then find the more consistent and reliable results.  Also I would prefer to work with the graphing paper itself instead of duplicating scaled vectors, and present it in this lab investigation, but since there was more than one person in my lab group, the sheet would have to be photocopied several times.  Also I would advise to make sure the sheet of paper does not move at all and that an eye is kept at all times on which sphere made which mark.