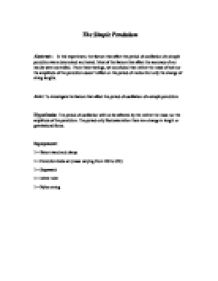 Aim: To investigate the factors that affect the period of oscillation of a simple pendulum.

Another observer used a stopwatch to measure the time for 20 complete swings. One swing was the time the bob takes to go out from its release position and return. Repeat this procedure using three other bobs of different masses. In each case we used the same length of string and amplitude. 3. The effect on the period of the pendulum when the amplitude is altered and the mass was determined. The lengths of string were kept constant. Time was measured for 20 complete swings when the bob is given amplitude of 4 cm, 6 cm, 8 cm, and 10 cm respectively. 4. The effect on the period of the pendulum when the length of string is altered was determined. The mass of the bob constant, and give the bob the same amplitude of 6 cm in each case are kept constant, but the length of the string changed progressively so that results are obtained for lengths of 10 cm, 20 cm, 30 cm, and 40 cm. Results: Table 1: The effect of the mass of the bob in the period of motion Length = 20 cm, amplitude = 6 cm Mass of bob Time for 20 swings Period of motion (s) ...read more.

One was systematic error and the other one was random error. Systematic error included the accuracy of stop watch or the accuracy of a metre ruler. Random error like rough estimation of data, human errors, air friction and equipment defaults. In future, to deal with these errors we should use more precise and calibrated instruments to measure time and maybe use a tape measure rather than a metre rule. A random error like rough estimation needs to be more decimal places. A human error like calibration needs to be focused on. Other stuff like air friction needs to be reduced to minimum when it is being experimented. And also the equipment defaults can be prevented by repairing or replacing equipment now and then. In future, we also would need more time to be accurate about the graphs. This will be done by experimenting 5 trials or more to be more precise. Conclusion: The aim was to investigate what factors affected the period of oscillation. The results and the experimentation led us to conclude that the length of the string is factor that affects the period of oscillation. This supports and proves the hypothesis stated above. Other two did not have an effect on the period of oscillation. ...read more.