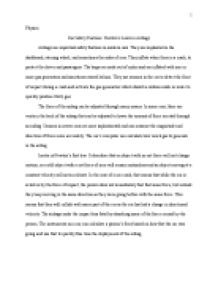 ﻿Physics Car Safety Features: Newton?s Laws in Airbags Airbags are important safety features in modern cars. They are implanted in the dashboard, steering wheel, and sometimes the sides of cars. They inflate when there is a crash, to protect the driver and passengers. The bags are made out of nylon and are inflated with one or more gas generators and sometimes stored helium. They use sensors in the car to detect the force of impact during a crash and activate the gas generators which dissolve sodium azide in water to quickly produce NaN3 gas. The force of the airbag can be adjusted through many means. In some cars, there are vents in the back of the airbag that can be adjusted to lower the amount of force exerted through an airbag. ...read more.

This means that they will collide with some part of the car as the car has had a change in directional velocity. The airbags make the impact less fatal by absorbing some of the force carried by the person. The instruments on a car can calculate a person?s force based on how fast the car was going and use that to quickly fine tune the deployment of the airbag. In modern cars there are even sensors in the seats to tell if someone is sitting there and how much they weigh. A car can use their weight with the speed of the car and Newton?s second law to more finely tune the airbag. ...read more.

These three fundamental laws of motion justify why airbags are necessary in cars. It is ethically expected that cars will be safe when people drive them. Car companies can also sell their cars better for a higher economic product when they are equipped with the most modern of car safety features. This need and expectation for car safety lead to inventions like airbags, car seat belts, and car designs to minimize force and damage in a car. Advancements in car safety features started new laws that facilitated the use of safety features like seat belts and set regulations for other features like airbags. Some advancements also impacted the social and ethical norms. For example, it is now considered wrong for someone to not wear a seatbelt and it is also illegal. Ultimately advances in car safety features have helped everybody and made the world a safer place. ...read more.