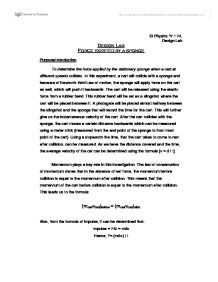 Force exerted by a sponge

To determine the force applied by the stationary sponge when a cart at different speeds collides. In this experiment, a cart will collide with a sponge and because of Newton’s third Law of motion, the sponge will apply force on the cart as well, which will push it backwards. The cart will be released using the elastic force from a rubber band. This rubber band will be set as a slingshot where the cart will be placed between it. A photogate will be placed almost halfway between the slingshot and the sponge that will record the time for the cart. This will further give us the instantaneous velocity of the cart.

Also, from the formula of impulse, it can be determined that:

Because we have already recorded the time that the cart takes to come to rest after collision, we can put it in the above formula, along with the momentum calculated before. This will finally give us the force exerted.

Independent variable: Speed of the cart

Dependant variable: Force applied by the sponge, Distance covered by cart after collision.

Friction of surface: Friction means that there is net force

Shape and size of cart

Place a photogate at almost halfway through and mark the point where it is placedMake sure that a meter stick is placed parallel to the apparatus with its tip at the end point of the spongeNow release the slingshot such the cart collides with the sponge and moves a certain distance backwardsAs soon as the cart hits the sponge, start a stopwatch and stop when the cart comes to rest. Record this time. Also, note down the distance of the cart when it moves backwardsRepeat steps 2, 5 and 6, where the slingshot is stretched more each time such that the velocity of the cart increases.Use the data collected to first calculate the velocity of the cart, then the momentum and then the force using the formula derived from impulse.

The apparatus is set up as below: