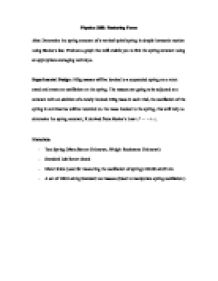 Experimental Design: 100g masses will be hooked to a suspended spring on a retort stand and create an oscillation on the spring. The masses are going to be adjusted at a constant with an addition of a newly hooked 100g mass in each trial, the oscillation of the spring in centimetres will be recorded vs. the mass hooked to the spring, this will help us determine the spring constant, K derived from Hooke’s Law

The mass added will be kept at a constant increase of 100g per trial; each 100g mass will be hooked on to the mass bottom of the previous mass.

The increase in the oscillation of the spring will be measured by a stationary meter stick placed vertically beside the spring placed in between the retort stand holder; each measurement taken will be measured to the nearest 0.05 cm and recorded on a data table.

The environmental conditions such as room temperature will be kept constant at around 20-24°C in order to keep the oscillation of the spring at a minimum, this would make a more accurate result of the spring constant. The mass added will be controlled by using the same mass of 100g (manufactured by one manufacturer with same color texture..etc.) for every trial, this would keep the uncertainty of the masses at a minimum and produce a better result for the spring constant.

** The height of the spring increases after each mass is added, but a decrease in value will be shown on the ruler because the ruler is placed up side down for ease of reading.

two uncertainties are involved in this experiment.

Percent Uncertainty for Oscillation of Spring:

Average Value of “The Spring Constant” (

The General Equation for the