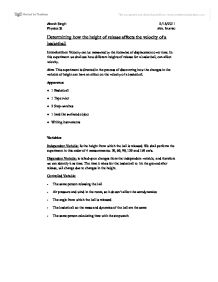 Introduction: Velocity can be measured by the formulae of displacement over time. In this experiment we shall see how different heights of release for a basketball, can affect velocity.

Aim: This experiment is directed in the process of discovering how the changes in the variable of height can have an effect on the velocity of a basketball.

Dependent Variable: is relied upon changes from the independent variable, and therefore we can identify it as time. The time it takes for the basketball to hit the ground after release, will change due to changes in the height.

All figures with more than 3 decimal places are shown to a smaller degree but the memory of calculator was used in calculations for the sake of accuracy.

Here I will show the workings for the processed data summarized in the previous table.

To find the average time:

The next step is to calculate the velocity, which can be found by 2 methods. Graphically or using the formula of velocity. We shall first analyze the graphical method:

Is attached at the back of the lab report.

To improve I could maybe get two laser gateways, which self time using a computer, when the basketball is released and when it impacts the ground. This is a much more accurate result.

Due to this large uncertainty because of the synchronization, we should’ve also taken a larger number of data so we could have a more accurate overall average. And maybe, more people doing the stop-watch simultaneously which will allow us a more accurate reading.

Additionally there may also have been parallax error, caused when the ball has to be fixed to the wall at the x height. It may have been not precise.

To improve we could get a flat surface and place it exactly at the height. And then place the ball above it. And when you remove it, the ball falls, pentrating the laser and starting of the counter. Giving is us all in all much more accurate results. Although, this may be expensive to encourage.