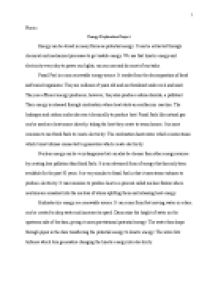 Energy can be stored in many forms as potential energy. It can be extracted through chemical and mechanical processes to get usable energy. We use that kinetic energy and electricity every day to power our lights, run our cars and do most of our tasks.

Fossil Fuel is a non-renewable energy source. It results from the decomposition of dead and buried organisms. They are millions of years old and are fossilized under rock and sand. They are efficient energy producers, however, they also produce carbon dioxide, a pollutant. Their energy is released through combustion where heat starts an exothermic reaction. The hydrogen and carbon molecules react chemically to produce heat. Fossil fuels like natural gas can be used as a heat source directly, taking the heat they create to warm homes. It is more common to use fossil fuels to create electricity. The combustion heats water which creates steam which turns turbines connected to generators which create electricity.

Nuclear energy can be very dangerous but can also be cleaner than other energy sources by creating less pollution than fossil fuels. It is an advanced form of energy that has only been available for the past 50 years.

3 of water per second falling from 10 ft. (normal conditions) would need to run for 2 hours and 35 minutes, very comparable to the wind turbine.

Yes, the United Kingdom has been a major energy user for a long time. They account about 2% of the world energy use per capita.

Similar to the United States, England has national departments devoted to work with energy like the Department of Energy & Climate Change. The current energy policy of the entire United Kingdom is set in the Energy White Paper of May 2007 and Low Carbon Transition Plan of July 2009.

There are currently no groups trying to take the energy of the UK. However, England has used foreign resources for energy.

As local fuel reserves have been drying up, the UK has built a reliance on foreign oil and gas.