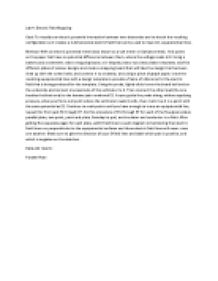 Goal: To visualize an electric potential interaction between two electrodes and to sketch the resulting configuration as it creates a 2-dimensional electric field that can be used to map 2-D, equipotential lines.

﻿Lab 4: Electric Field Mapping Goal: To visualize an electric potential interaction between two electrodes and to sketch the resulting configuration as it creates a 2-dimensional electric field that can be used to map 2-D, equipotential lines. Method: With an electric potential meter (also known as a volt meter or Galvanometer), find points on the paper that have no potential difference between them, where the voltage reads at 0. Using a battery and a voltmeter, take a mapping board, a U-shaped probe, two clear plastic templates, and five different plates of various designs and create a mapping board that will take the design that has been lined up with the screw holes, and connect it to a battery, and using a piece of graph paper, trace the resulting equipotential lines with a design template to provide a frame of reference for the electric field that is being produced for the template. ...read more.

Make sure to give the direction of your E-field lines and label which pole is positive, and which is negative on the sketches. Data and results: Parallel Plate Two Point Point and Plate Faraday Ice Pail Insulator and Conductor in a Field Analysis: The reason why equipotential lines near a conductor?s surface are parallel to it is because when there is a charged surface, as it is along the conductor?s surface, it makes it so that the electric field lines go parallel to it. As voltage goes up along the electric field lines, there will always be points that are parallel to these lines at which there is no voltage, or rather the equipotential line shows up perpendicular to the electric field lines. And why are the equipotential lines near the insulator surface perpendicular to the surface? ...read more.

The voltage ?slope? if one can visualize it that way (like in the topographical map) is corresponding to these lines. Each line indicates that there will be points that will pop up as the same potential, and hence why there ends up being equipotential when the voltage goes to zero, and this is when all these points are at ninety degrees or perpendicular to the force lines. And then when there are lines of equipotential, just like with the topographical map, the closer the line are to each other (the more ?squished together? they are), the steeper the voltage ?slope? or voltage gradient will end up being. And if the voltage gradient is more sloped or steeper than the insulator can stand, then the insulator will break down (think of how lightning has to break down the insulator that the Earth?s atmosphere has that would inhibit anything less than a huge amount of voltage between opposite charges). ...read more.