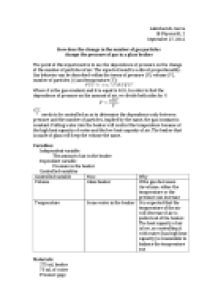 How does the change in the number of gas particles

change the pressure of gas in a glass beaker

Where R is the gas constant, and it is equal to 8.31. In order to find the dependence of pressure on the amount of air, we divide both sides by V:

needs to be controlled so as to determine the dependence only between pressure and the number of particles.

Make sure to hold the syringe strongly, as the low pressure in the beaker will pull air back in

Below is the table showing all the five trials, including the average results.

This is the graph representing the dependence of pressure with respect to the amount of air:

Through this experiment it was concluded that the decrease of amount air leads to a decrease in pressure, just like an increase in the amount of air leads to the increase in pressure, meaning a direct proportionality, just as expected. Some of the mistakes include 18°C water instead of room temperature (20°C), which could have allowed some variation in the data. Other sources of error would include the device itself: it can be clearly seen that the pressure gage is not 100% precise, even though very close to it, which is the reason why there were 5 trials to eliminate that error, or at least minimize its effect.