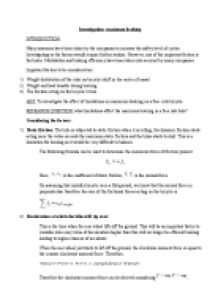 Many measures have been taken by the companies to increase the safety level of cycles. Investigating as the factors would require further studies. However, one of the important factors is the brake. Modulation and braking efficiency have been taken into account by many companies.

Important factors to be considered are:

Weight and load transfer during braking

The friction acting on the bicycle’s tires

AIM: To investigate the effect of limitations on maximum braking on a free- ride bicycle.

RESEARCH QUESTION: what limitations affect the maximum braking in a free ride bike?

Where H1 is the perpendicular distance to the line of action

The counter clockwise moment force will be

Where mg is the weight and L2 the perpendicular distance to the line of action.

Thus, a ( the maximum acceleration permitted) =  =

Calculate the Centre of Mass using the following formula:

Using a board, place one end on a scale.

The rider is to lie on this board with the end of his head at the of the board on the side with the scale.

Place an object the same height as the scale under the board where the rider’s feet end.

Record the value visible on the scale.

Calculate the Centre of Mass by the following formula:

Hang the bike from one point and drop a string with a weight. Mark generally the lone on the bike frame

Measure the height of each from the ground and combine them

Use the formula  to calculate the maximum acceleration.