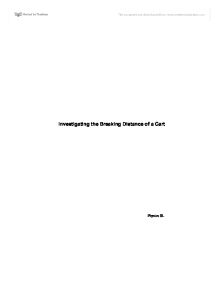 Investigating the Breaking Distance of a Cart

Investigating the Breaking Distance of a Cart

Braking distance is the distance travelled by an object when the brakes are applied. In this experiment we are looking at the stopping distance of a crate which is similar ot the concept of braking distance covered by a moving object.

Why it was decided to take into account the initial velocity was because of the simple dependency, which was evident after calculations. Since during braking of an object the kinetic energy (EK) becomes heat energy. Thus the following equation can be written down

In order to come to distinct results a linear graph should be obtained. Thus we should have an equation, which is simple and shows a distinct dependency. We can simplify the equation to show that distance is directly proportional to the square of the speed.

Table 1.1 demonstrates the very first data received from the light gates and the measuring ruler. The data has not yet been converted to necessary units.

Table 1.2 on the other hand shows the previous data from table 1.1 only in the correct units for further calculations for processed data. The error chosen for the time was a systematic error of ±0,0005 s. The error for the measuring ruler was a reading error of  ±0,05 m.

The width of the cardboard flag was 5.2 cm. In the calculations this must however be converted to 0.052 m for the right calculations to be made.

The initial problem of launching the crate should have been solved with special apparatus. Some sort of spring that could launch the crate into motion. A spring which when compressed and then released would launch the crate into motion. Thus it would have been possible to systematically compress and release in ranging lengths.  To remove the additional braking of the motion on the crate a singular 1 meter long track should have been in use. For more realistc results the wheels could have included tyres. Thus the information gathered could be applied to vehicles. The frictional force between tires and the roadway are highly variable. The friction depends on the tire pressure and tire composition.