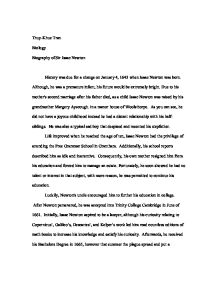 History was due for a change on January 4, 1643 when Isaac Newton was born.  Although, he was a premature infant, his future would be extremely bright. Due to his mother's second marriage after his father died, as a child Isaac Newton was raised by his grandmother Margery Ayscough. in a manor house of Woolsthorpe.  As you can see, he did not have a joyous childhood instead he had a distant relationship with his half-siblings.  He was also a typical sad boy that despised and resented his stepfather.
Life improved when he reached the age of ten, Isaac Newton had the privilege of attending the Free Grammar School in Grantham.  Additionally, his school reports described him as idle and inattentive.  Consequently, his own mother resigned him from his education and forced him to manage an estate. Fortunately, he soon showed he had no talent or interest in that subject, with more reason, he was permitted to continue his education.
Luckily, Newton's uncle encouraged him to further his education in college.  After Newton persevered, he was accepted into Trinity College Cambridge in June of 1661.  Initially, Isaac Newton aspired to be a lawyer, although his curiosity relating to Copernicus’, Galileo’s, Descartes’, and Kelper’s work led him read countless editions of math books to increase his knowledge and satisfy his curiosity.

Conversely, an object will remain at a constant speed in a straight line unless there is a force that will stop it. For instance, when you happen to fling a pencil across the room, it rolls and eventually stops.  Although, a literal object is not preventing the pencil from rolling, friction causes the pencil to stop. Friction is the surface resistance to relative motion.  Subsequently, the following law is: the rate of change of momentum of a body is equal to the resultant force acting on the body and is in the same direction. In simpler terminology, Newton is stating that the velocity in the momentum of an object is symmetrical to the amount of force utilized on the object.He also specifies that the change in the course of momentum is decided by the angle from which the force is exercised.    It can also be converted into an equation:

To imagine our existing society without Sir Isaac Newton would be unfeasible.  He was an unquestionably accomplished scientist, and our world would be drastically altered without him.  However, lets not stop using his discoveries to improve the world.  Isaac Newton’s breakthroughs will forever be used for the betterment of mankind.