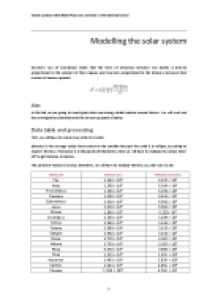 Modelling the Solar System. In this lab we are going to investigate data concerning orbital motion around Saturn. We will work out the centripetal acceleration and the inverse squared of radius.

In this lab we are going to investigate data concerning orbital motion around Saturn. We will work out the centripetal acceleration and the inverse squared of radius.

First, we will have to convert our units to SI units.

Distance is the average radius

It is known that centripetal acceleration and velocity are:

Centripetal acceleration can be therefore described as:

The following table describes the centripetal acceleration and the velocity of the satellites.

To make sure these results are accurate, the percentage error will be calculated:

This proves that the data is accurate.

As the distance between the planet and the satellites increases, the centripetal acceleration decreases.

This proves that Newton’s Law of Gravitation is correct, even though this is only an approximation, because for each satellite, there are more forces of attraction acting on than Saturn’s. This can be the force of attraction caused by other satellites.