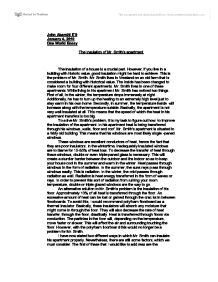 The Insulation of Mr. Smith’s apartment

The insulation of a house is a crucial part. However, if you live in a building with historic value, good insulation might be hard to achieve. This is the problem of Mr. Smith. Mr. Smith lives in Vreeland on an old farm that is considered a building with historical value. The inside has been changed to make room for four different apartments. Mr. Smith lives in one of these apartments. While living in his apartment Mr. Smith has noticed two things. First of all, in the winter, the temperature drops immensely at night. Additionally, he has to turn up the heating to an extremely high level just to stay warm in his own home. Secondly, in summer, the temperature inside will increase along with the temperature outside. Basically, the apartment is not very well insulated at all. This means that the speed of which the heat in his apartment transfers is too big.

An alternative solution to Mr. Smith’s problem is the insulation of his floor. Approximately 10% of all heat is transferred through the floor. An excessive amount of heat can be lost or gained through the cracks in between floorboards. To avoid this, I would recommend polyfoam floorboard as a thermal insulator. Basically, these insulators will absorb any moisture that might come in through the floor. They will also decrease the rate of heat transfer, through the floor, drastically. Heat is transferred through floors via conduction. The particles in the floor will, depending on the temperature, move faster or slower. This will affect the air and surrounding touching the floor. However, with the polyfoam floorboard this would no longer be a problem for Mr. Smith.

I have now stated two different ways in which Mr. Smith can insulate his apartment properly. Nevertheless, there are still some factors, which we must consider. The first of these that I would like to address are the environmental factors. The particular floor insulation that I have chosen is completely ozone friendly.

Another problem, that has not been previously mentioned, is the social problem. Improving the insulation of one’s apartment could be noisy and time consuming. If he has three neighbors, then they could find his newly acquired insulation problematic. This is a social factor that should be taken into consideration.

Some people believe that the local authorities should be a part of the insulation of people’s houses. I partially agree with them on this topic. I think that the government should fund for the bare minimum. If, afterwards, the inhabitant would like to make some additionally changes then they should pay for that themselves. I think that they should do this because it is a necessity for a human being to live in a comfortable temperature in their own house.

In conclusion, I think that it is very simple to insulate one’s home. If you know what areas to look for, it can make a drastic difference. In the case of Mr. Smith, I don’t think that he has to worry about any other factors except the fact that his building might have historical value. The insulation of a house is vital and must not be overlooked.