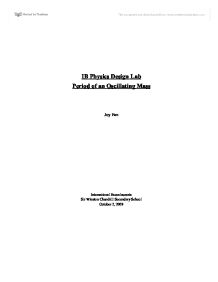 Period of an Oscillating Mass

Period of an Oscillating Mass

The aim of this experiment is to predict how the mass of the oscillating object m and the elongation of the spring l will influence the period of an oscillating mass on a spring and devise an experiment to test that prediction.

The Second Law of Motion as proposed by Sir Isaac Newton states that the net external force on a body is equal to the mass of that body multiplied by its acceleration:

Length of spring at equilibrium:

Qualitative Observations made: The 1.60kg mass oscillates significantly slower than the 0.400kg. The ring stand also wobbled a little during the experiment, which is a source of uncertainty.

Now in the following

Obvious sources of error would include having tools that were difficult to measure precisely with, namely the meter stick and the stop watch, and also getting the spring to suspend symmetrically from one point. Also as I previously mentioned, the stop watch is only accurate to about one tenth of a second.

Realistic improvements that could cut some weaknesses of the procedure could include using greater masses to obtain a larger range of results and doing the procedure in a greater space. The reason for this change would be to increase the time of oscillation because when we used smaller masses, often the time of the period was so short it was very difficult to start and stop the timer. If the period becomes slower and takes up more time, it could make timing more precise. Furthermore, more data points would increase the likeliness of an obvious correlation.

Moreover, I believe the more trials done, the better chance you will get of obtaining the best average value. The procedure itself is not that complicated, and I believe if I took the time to do 5-7 trials instead of just 3, the data would be more accurate. To improve the investigation I would also suggest using photo gates instead of stop watches to obtain time measurements more accurately and precisely.