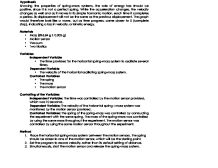 Physics 20 - Lab 3.4 Oscillatory Motion Aim Use a Motion Sensor to collect time and distance data for a vertically oscillating spring-mass system. Problem What is the rate of energy loss in a horizontal spring - mass system over time? Hypothesis Knowing the properties of spring-mass systems, the rate of energy loss should be positive, since it is not a perfect spring. While the acceleration changes, the velocity changes as well and as it moves in its simple harmonic motion, each time it completes a period, its displacement will not be the same as the previous displacement. The graph would therefore look like a wave, but as time progress, come closer to 0 (complete stop), indicating a loss in velocity, or kinetic energy. Materials * Mass (896.84 g � 0.005 g) * Motion sensor * Vacuum * Two Elastics Variables Independent Variable * The time provided for the horizontal spring-mass system to oscillate several times. Dependant Variable * The velocity of the horizontal oscillating spring-mass system. Controlled Variables * The spring * The mass * The motion sensor Controlling of the Variables Independent Variable: The time was controlled by the motion sensor provided, which was 10 seconds. ...read more.

and time (s) for a horizontally oscillating spring-mass system. The graph shows that as time increases, the velocity of the horizontal spring-mass system decreases gradually (from about 1.03 m/s to 0.12 m/s). Therefore, we can conclude that there is a net loss in energy from the system ( J per second), which is caused by friction, which slows down the spring-mass and decreases the velocity. The wave-like pattern in the graph is caused when the spring-mass system is released from its maximum displacement; the restoring force pulls it to towards the opposite side (since velocity is a vector, this produces a negative velocity), and then back again to its beginning point, slowing down slightly due to friction. A major source of error came from the air resistance and friction, which caused the spring-mass system to gradually slow. In reality, due to simple harmonic motion, the system would continue to oscillate for an infinite period of time. However, to completely eliminate this friction would be very difficult; though the effects of friction were reduced by the air being forced under the spring to create an "air-hockey" effect. To improve on this further, I would recommend lubricants on the surfaces in contact (the rail and spring). There will always be air resistance in this experiment. If these issues are rectified, then future experiments concerning this method of experimentation will provide more accurate results. ...read more.