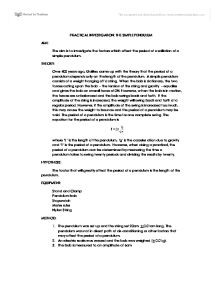 Period of a Pendulum

The aim is to investigate the factors which affect the period of oscillation of a simple pendulum.

Amplitude of Swing vs Time of a Pendulum

Length of String vs Time of a Pendulum

Again, drawing conclusions from this experiment, it can be seen that the amplitude of the swing does not affect the period of a pendulum. Although there are varying results, no definite conclusion can be draw from the data.