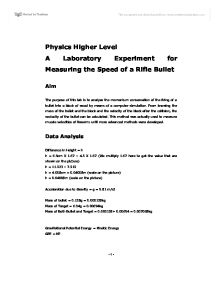 Physics Higher Level A Laboratory Experiment for Measuring the Speed of a Rifle Bullet Aim The purpose of this lab is to analyze the momentum conservation of the firing of a bullet into a block of wood by means of a computer simulation. From knowing the mass of the bullet and the block and the velocity of the block after the collision, the veclocity of the bullet can be calculated. This method was actually used to measure muzzle velocities of firearms until more advanced methods were developed. Data Analysis Difference in Height = h h = 6.9cm X 1.67 - 4.5 X 1.67 (We multiply 1.67 here to get the value that are shown on the picture) ...read more.

Bullet = Bullet + Target (Conservation of Momentum) = 0.000128 X = 0.007068 X 0.887 = 48.98 m/s (m/s) Hence, the Velocity of Bullet is, 48.98 m/s Data Analysis: error analysis It was reported to my attention that an error occurred while measuring the top height reached by the pendulum. As I was on a field trip to Singapore, I was unfortunately out of town during the experiment. Only a single measurement of the experiment was transmitted to me afterwards. Having more data would be useful to confirm the results obtained. A slow motion detector/camera was used to measure the exact height of the pendulum. ...read more.

is sensibly lower than the speed measured on commercial guns. For instance, the Daisy Model 499, one of the most widely used BB gun and a standard model for competition, has a velocity of 80m/s. In general, the velocity of normal BB guns is between 80 and 90m/s. As the kinetic energy is transferred to the pendulum, some energy can be lost to heat, lateral deviation of the pendulum or friction. But we estimate to be negligible in the present experiment. The pendulum must be perfectly static at the beginning of the experiment. The measurement equipment, including the pendulum should be decoupled from the table with a layer of foam. This would prevent vibrations from the floor or from the equipment to affect the results of the experiment. ?? ?? ?? ?? - 1 - ...read more.