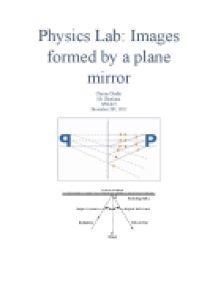 After doing this plane mirror lab, I discovered that the image is always the same distance behind the mirror as the object is in front of the mirror. The object and image always line up along the same normal line and the image is always upright and the same size as the object. It is also located behind the mirror, as a virtual image. Based on the law of reflection, after the light strikes the mirror, it can be concluded that the angle of incidence equals the angle of reflection and can be measured from the normal to either the incident or reflected ray. Either way, the angle measurement remains the same. When the mirror is placed at eye level, one can see a virtual, upright, and virtual image of the same size as the object no matter what the position of the object is. In addition, the magnification of a plane mirror is always equal to one.

For this lab, I used pins as my objects. Initially I started with placing the pin object at an angle of incidence of 10°, and then I measured the angle of reflection, which was the same.

I will now summarize the four laws of reflection for forming images by a converging mirror.