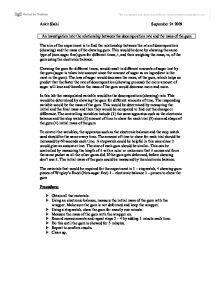 The aim of the experiment is to find the relationship between the rate of decomposition (chewing) and the mass of the chewing gum. This would be done by chewing the same type of (non-sugar free) gum for different times, t, and then weighing the mass, m, of the gum using the electronic balance.

Chewing the gum for different times, would result in different amounts of sugar lost by the gum (sugar is taken into account since the amount of sugar as an ingredient is the most in the gum). The loss of sugar would decrease the mass, of the gum, which helps us predict that the faster the rate of decomposition (chewing process) the more amount of sugar will lose and therefore the mass of the gum would decrease more and more.

Mass of gum without wrapper:

Calculating errors for the average sound:

Calculating the difference in mass:

Calculating errors for the average mass:

Presented data: Calculated average final mass of the gum and the difference in mass with their times

+ 0.0005 g/s. This result is found from the slope of a liner graph which in this case tells the proportionality factor between avg. difference of mass and the time.

The lab was a success. This can be seen form the linear relationship between average difference of mass of the gum and the rate of decomposition. But there were some minor problems that occurred during the lab, as it can be seen that the slope varies about

+ 0.0005. One problem could have been that the gum when weighed after it was chewed was sticking to its wrapper.  This caused it to gain more mass because the tiny bits of wrapper might got stuck in the gum thus increasing its mass.

The problem could be solved by using the weigh boat instead of the wrapper. This could have made the gum not stick in the surface.