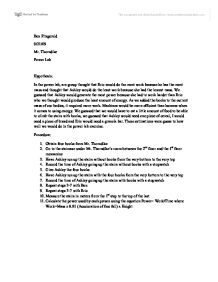 Ben Fitzgerald 9/21/09 Mr. Thorndike Power Lab Hypothesis: In the power lab, are group thought that Eric would do the most work because he has the most mass and thought that Ashley would do the least work because she had the lowest mass. We guessed that Ashley would generate the most power because she had to work harder than Eric who we thought would produce the least amount of energy. As we added the books to the current mass of our bodies, it required more work. Machines would be more efficient than humans when it comes to using energy. We guessed that we would have to eat a little amount of food to be able to climb the stairs with books, we guessed that Ashley would need one piece of cereal, I would need a piece of bread and Eric would need a granola bar. These estimations were guess to how well we would do in the power lab exercise. Procedure: 1. Obtain four books from Mr. Thorndike 2. Go to the staircase under Mr. Thorndike's room between the 2nd floor and the 1st floor mezzanine 3. ...read more.

This makes me think that if you do more work, then you also produce more power. We thought that as we added more books, that it would require us to work harder and use more energy, this is true to the actual because our work and our energy increased when we had books compared to when we did not have books. We said that machines are more efficient at using energy than humans, and that is completely true because our body's can only convert so much food or power into energy, compared to machines. We said that for us to walk up the stairs, I would have to eat a piece of bread, Eric would have to eat a granola bar and Ashley would have to eat a piece of cereal, we were way off, all three of us would need a piece of cereal because me and Ashley used less than a calorie on each trial and Eric used less than 1.5 calories with his trials. Some possible errors with this lab were things like were we all going at the same pace, did we skip steps, or touch every one, these things could in the end effect how much energy and power we produced. ...read more.