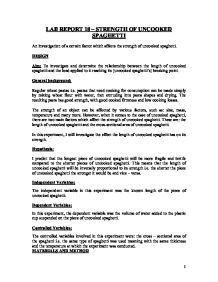 strength of an uncooked spaghetti

An investigation of a certain factor which affects the strength of uncooked spaghetti.

Regular wheat pastas i.e. pastas that need cooking for consumption can be made simply by mixing wheat flour with water, then extruding into pasta shapes and drying. The resulting pasta has good strength, with good cooked firmness and low cooking losses.

In this experiment, I will investigate the effect the length of uncooked spaghetti has on its strength.

The independent variable in this experiment was the known length of the piece of uncooked spaghetti.

Since the same type of spaghetti was used, the thickness i.e. the cross-sectional area of the spaghetti was kept constant hence, not affecting the readings obtained. The temperature at which all the experiments were conducted also remained constant in the room and this was made sure by constantly measuring the temperature of the room every 15 minutes and noting down the temperatures.

Table 1 below shows the different lengths of pieces of uncooked spaghetti used in the experiments and the volumes of water added to the plastic container serving as the load applied to the spaghetti pieces:

Since, water has a density of 1 g cm-3, the values of the volumes of water obtained above serve as the same values for the mass of water used. This means:

So, Mass = Density X Volume, and because the density of water is 1, Volume of water = the Mass of Water.

Using the above conversion, the load applied to the pieces of spaghetti was calculated.

The information included in the general background in the design section of this lab report on page 1 was obtained from the following web link: