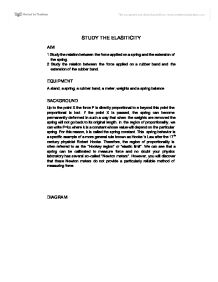 STUDY THE ELASITICITY AIM 1 Study the relation between the force applied on a spring and the extension of the spring. 2 Study the relation between the force applied on a rubber band and the extension of the rubber band. EQUIPMENT A stand, a spring, a rubber band, a meter, weights and a spring balance BACKGROUND Up to the point X the force F is directly proportional to e beyond this point the proportional is lost. If the point X is passed, the spring can become permanently deformed in such a way that when the weights are removed the spring will not go back to its original length. In the region of proportionality, we can write F=kx where k is a constant whose value will depend on the particular spring. For this reason, k is called the spring constant. ...read more.