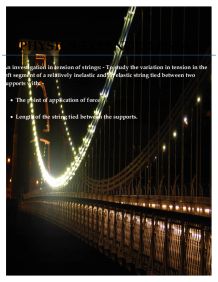 Suspension Bridges. this extended essay is an investigation to study the variation in tension in the left segment of a relatively inelastic and an elastic string tied between two supports 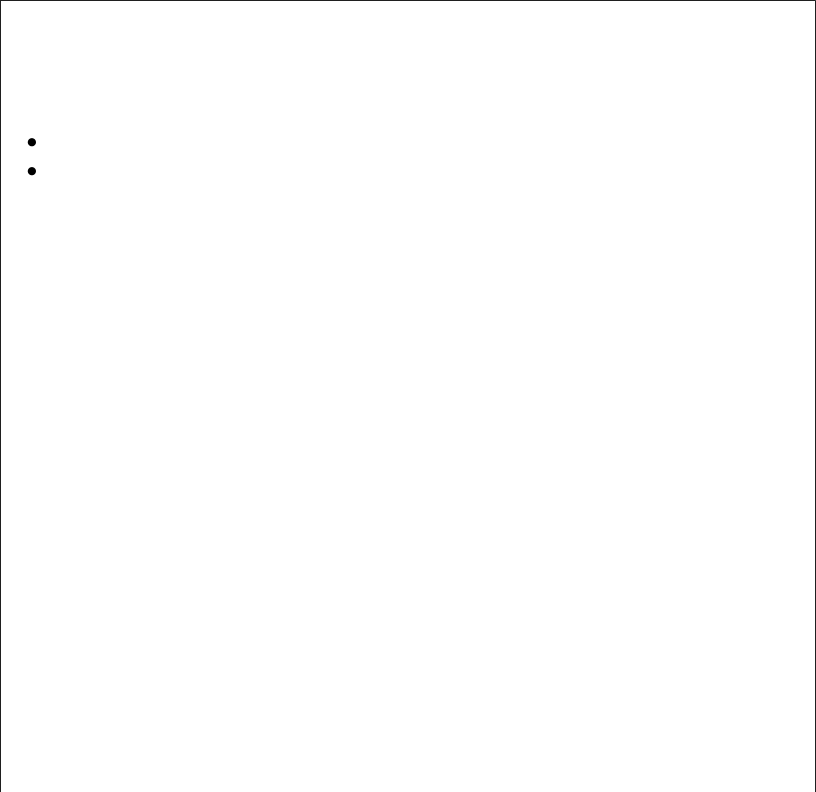 Suspension bridges are made of a long roadway with cables that are anchored at both ends to pillars. Vehicles on the roadway exert a compression force on the pillars which in turn exert a tension in the cables. However, the tension is not the same at different points across the cable and it also varies as the length of the cable varies.Taking inspiration from the suspension bridge, this extended essay is an investigation to study the variation in tension in the left segment of a relatively inelastic and an elastic string tied between two supports with the: -

Keeping in mind that the intrinsic property of the string plays a big role in determining the extent of deformation or change undergone due to the force applied, the research involves comparing the trends in the above variables for two strings of different strain values. Therefore, using their strain values, it would be safe to assume one string as relatively inelastic while the other as elastic.

Also, as the length of the string tied was increased, the tension decreased. However, the extent of decrease was not uniform for either string. The reason for the similar yet non-identical trend is attributed to the strain values of the strings and predictions have been made for strings with different strain values.

Strain in the strings

To quantitatively draw a comparison between the elasticity of the two strings, it is better to calculate their strain values. This is done by taking a fixed length of both the strings and applying a constant force. The ratio of change in the length of the strings to the actual length indicates their responsiveness to force.

For this, a controlled initial length (44 cm) was taken for both the strings and also the same bob was employed as the constant force (0.679 N). 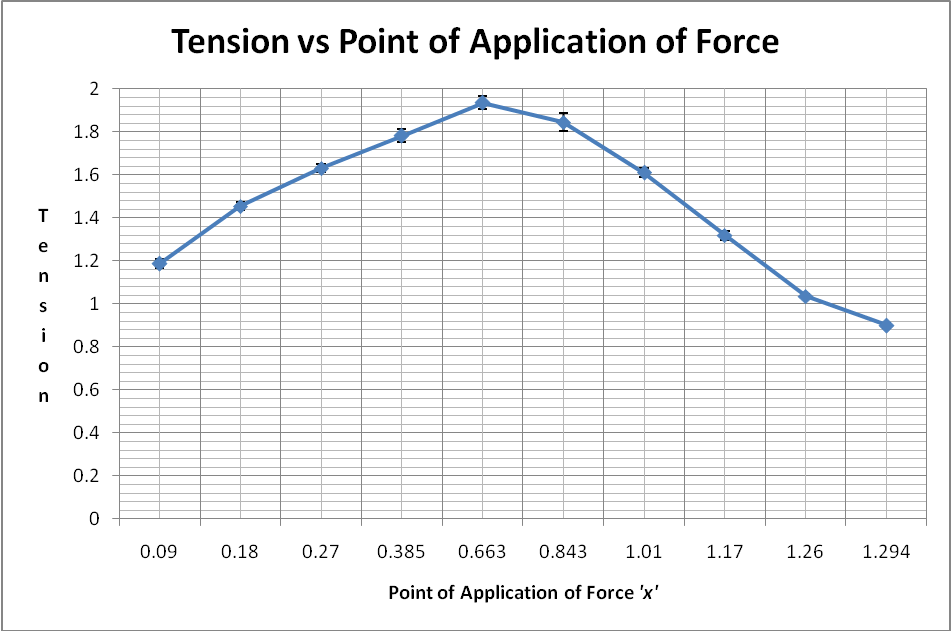 As we move horizontally from left to right across the nylon string while applying force, the tension experienced is highest at a point which is approximately the mid-point of the distance between the two rigid supports (nails). From that point onwards, the tension starts decreasing. The minimum tension experienced will be at a point of application of force which is the farthest from the first rigid support.  Hence, the curve is roughly like a wave which is extended towards the end. 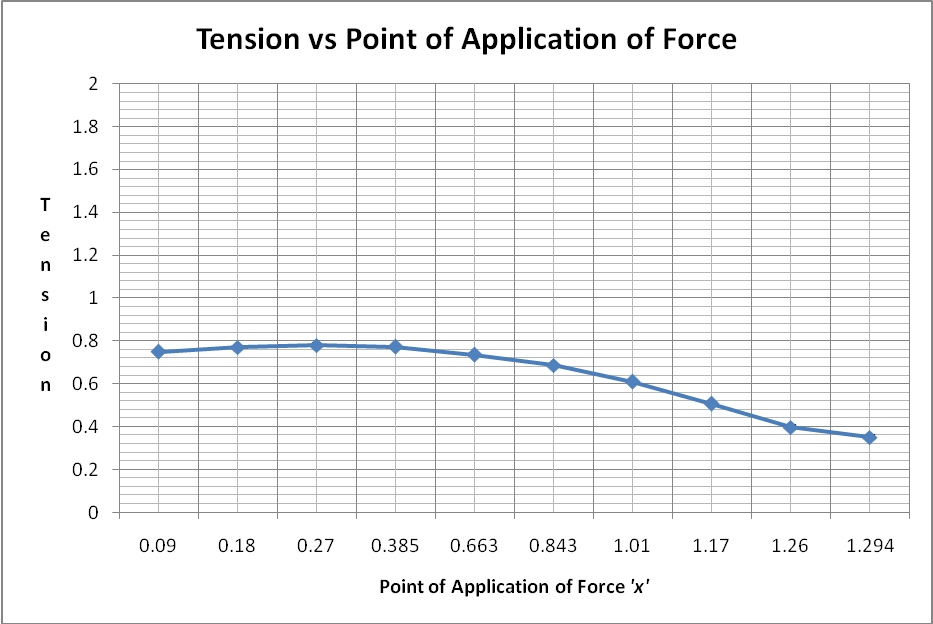 Both the nylon and the elastic band can be modeled by quadratic equations. This enables us to study the symmetry in the tension trend for the different strings. 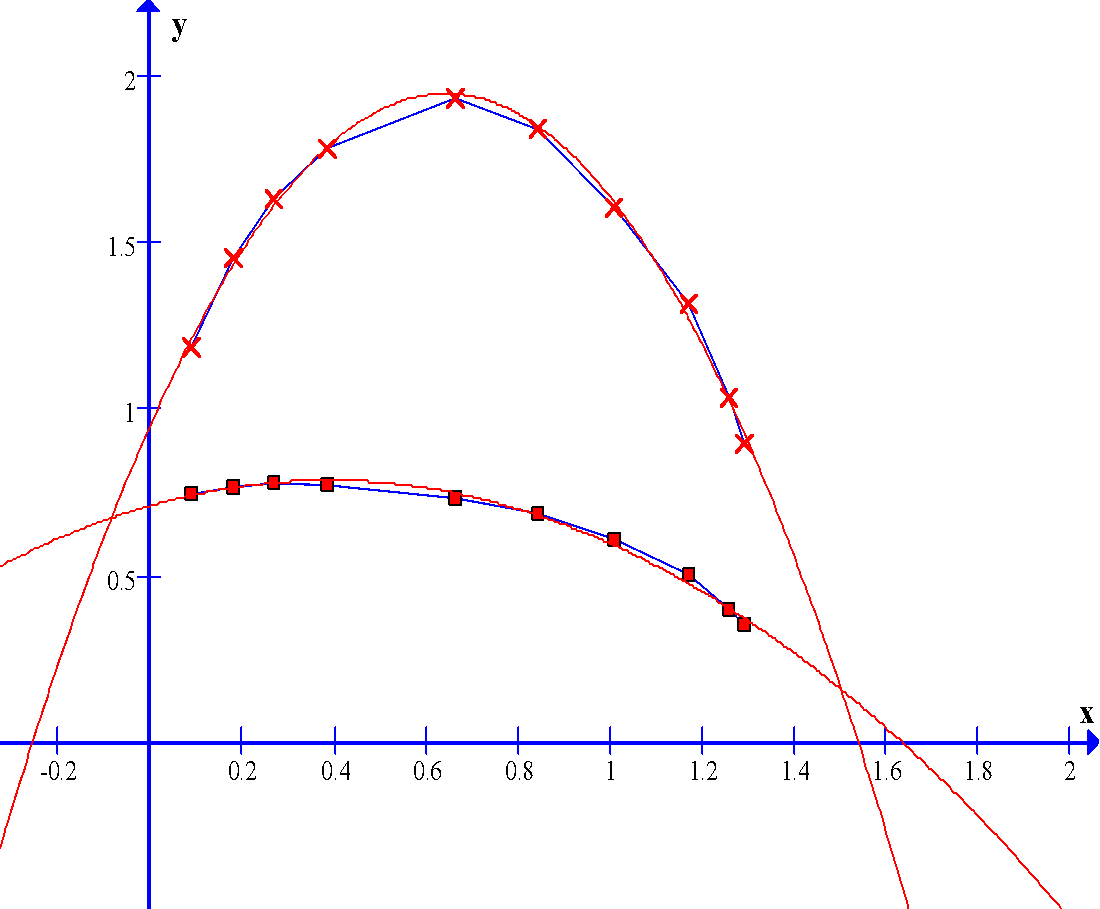 The axis of symmetry of the above graph is an important indication of the trend in tension as it divides all tension values in two parts gives the point of application of force wherein the tension is expected to be maximum.

From the values calculated above, we can infer that for a relatively non-elastic string the tension force is maximum further away from the rigid support and occurs somewhat halfway the distance (d/2 = 0.69 m) between the two supports.

However, that is not the case with a relatively elastic string wherein the tension is maximum and the trend is symmetrical quite nearer to the rigid support. 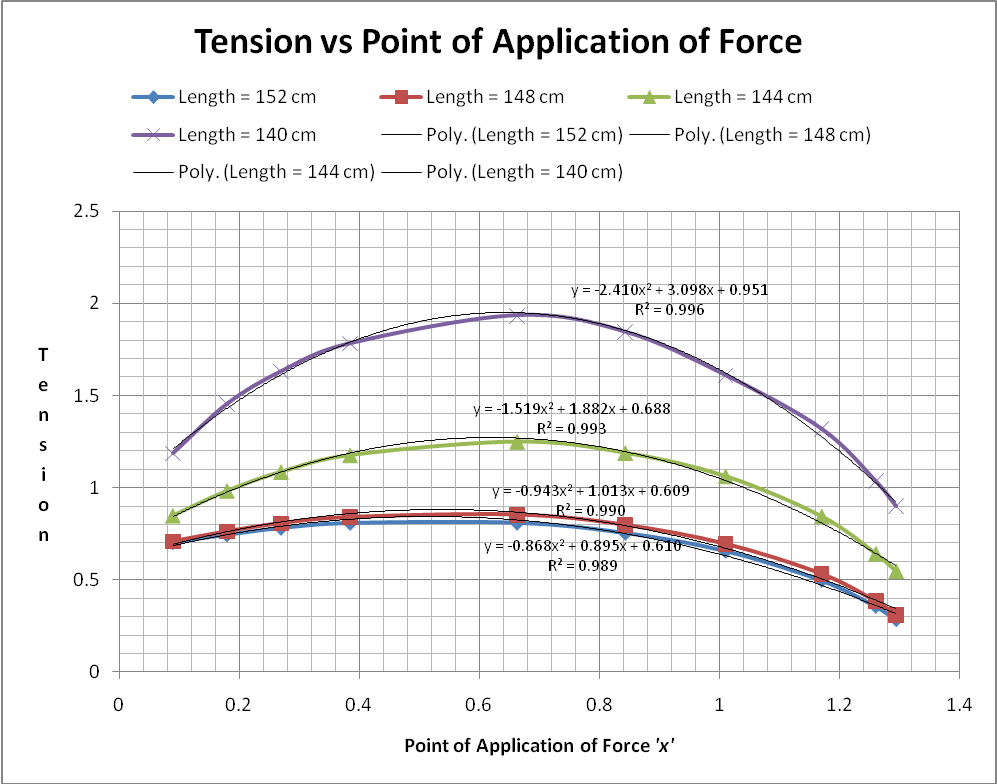 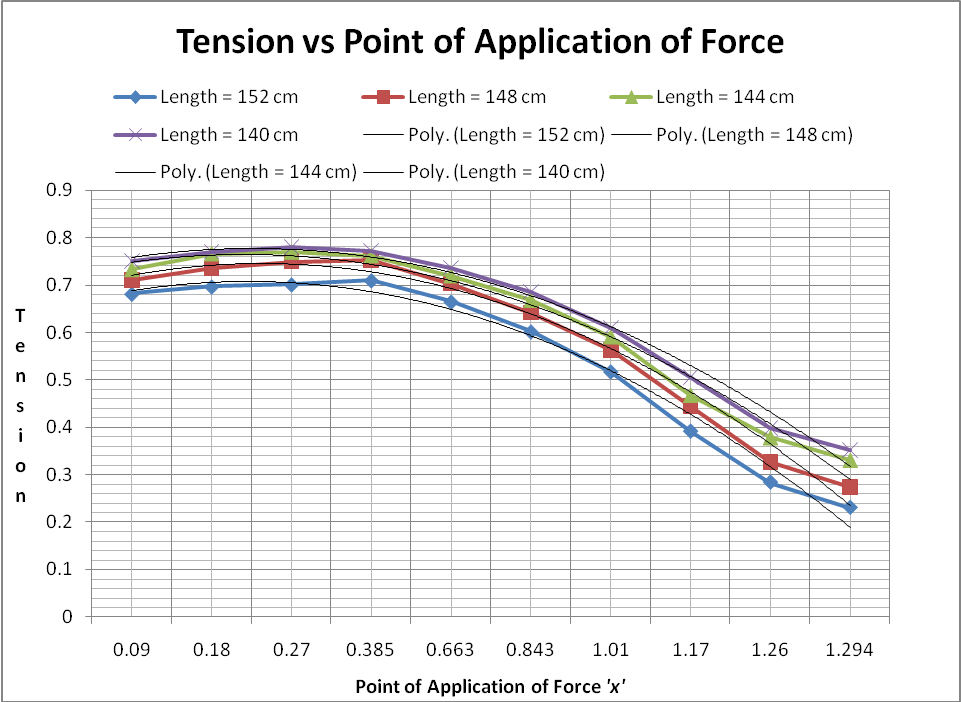 Using all these variables and applying the conditions for Static Equilibrium, I have found a general formula as follows to calculate ‘T1’ and ‘T2’. The derivation of the formula is as follows: -

As the system is in equilibrium, the sum of all the vector forces acting must be equal to 0. In the system, there are three main forces which are acting: - 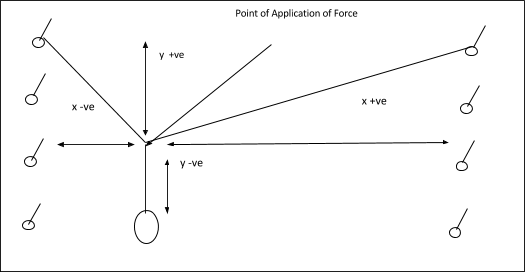 Substituting the value for T2 in Equation (2) from Equation (1) 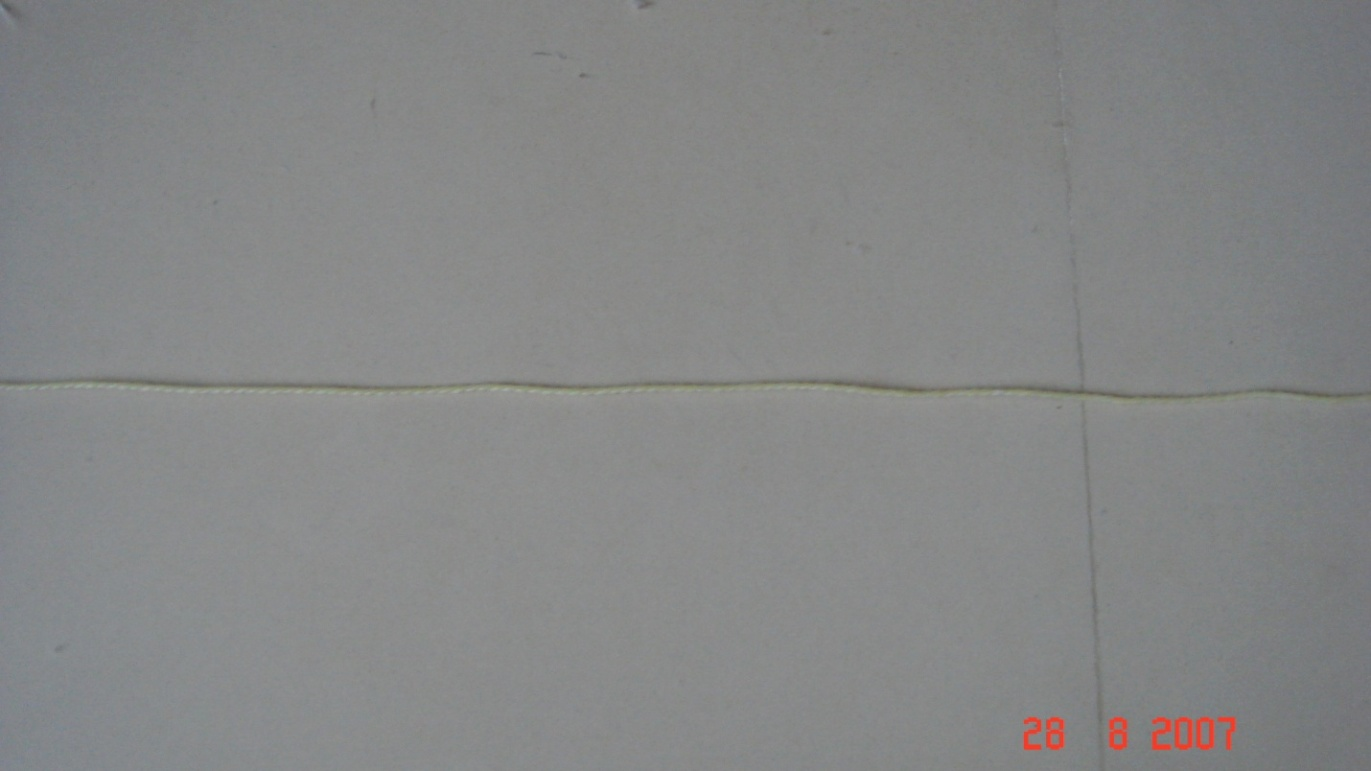 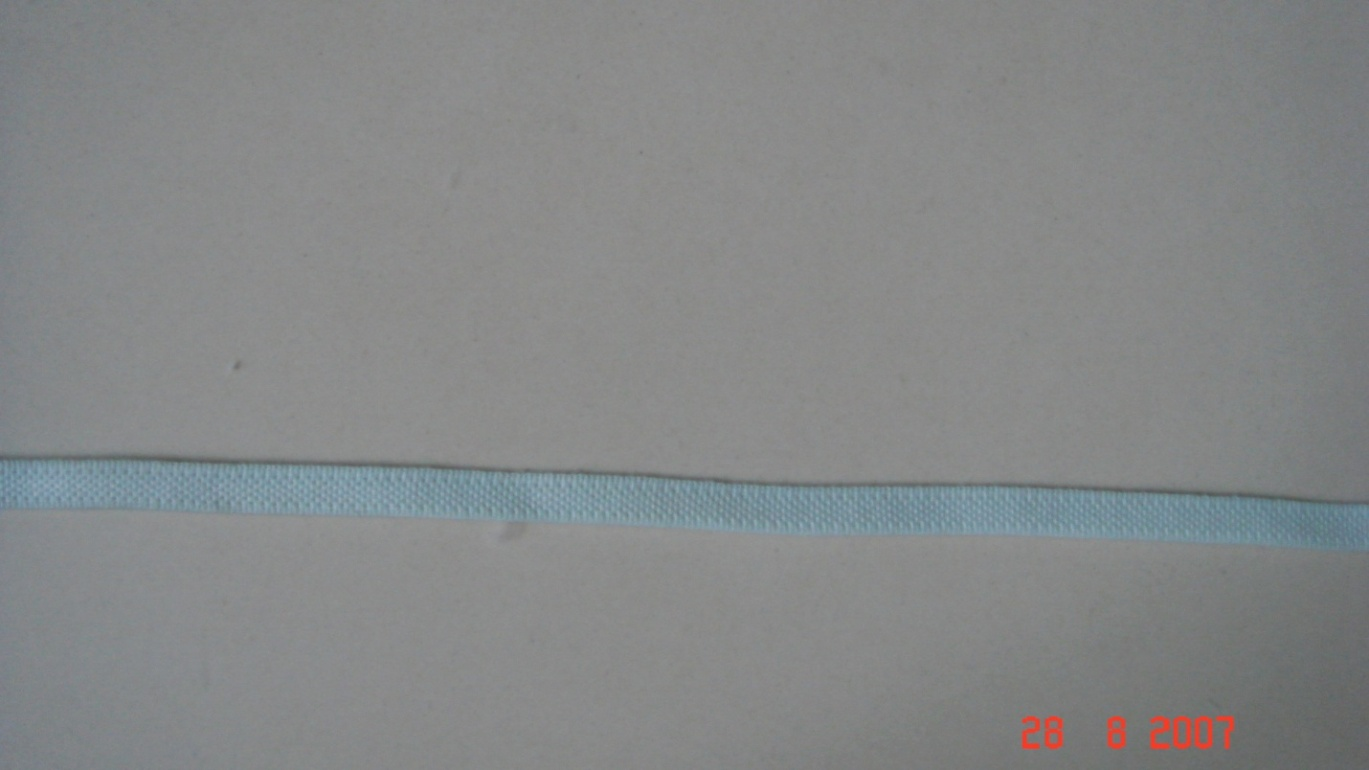