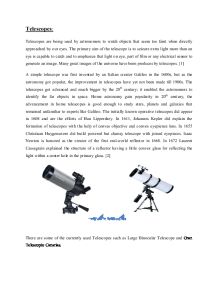 Telescopes are being used by astronomers to watch objects that seem too faint when directly approached by our eyes. The primary aim of the telescope is to seizure extra light more than an eye is capable to catch and to emphasize that light on eye, part of film or any electrical sensor to generate an image. Many great images of the universe have been produces by telescopes. [1]

A simple telescope was first invented by an Italian creator Galileo in the 1600s, but as the astronomy got popular, the improvement in telescopes have yet not been made till 1900s. The telescopes got advanced and much bigger by the 20th century; it enabled the astronomers to identify the far objects in space. Home astronomy gain popularity in 20th century, the advancement in home telescopes is good enough to study stars, planets and galaxies that remained unfamiliar to experts like Galileo. The initially known operative telescopes did appear in 1608 and are the efforts of Han Lippershey. In 1611, Johannes Kepler did explain the formation of telescopes with the help of conves objective and convex eyepience lens. In 1655 Christiaan Huygenswere did build powered but clumsy telescope with joined eyepieces. Isaac Newton is honored as the creator of the first real-world reflector in 1668.

The biggest ground-mounted telescope functioning currently is Gran Telescopio Canarias having an aperture of 10.4 m and light-combining zone of 74m2. There are some other scheduled tremendously big telescopes that contain 30 m/655 m2Thirty Meter Telescope and 25 m/368 m2Giant Magellan Telescope which are also a target at the ending of this era or the staring of next decade for accomplishment. The above described telescopes relate to the next generations of optically ground-mounted telescopes. The design of these is much broader than the early ones. The telescope is considerably greater than the other deliberate telescopes, even with the scrape of the E-ELT, having a diameter of 39.3m for the main glass and 1116 m2 of light-combining surface. The next generation telescopes will possess various scientific instruments. It will also be likely to shift from one tool to another within some minutes. The vault and telescope will be capable to alter locations on the sky and to begin a new reflection within a small duration. The next generation telescopes will not also add the detection of planets downcast to Earth, like objects through unintended calculations of the shaking movement of the stars disturbed by the planets that path them, but also having the straight photography of greater planets and likely the description of the environment.[12]