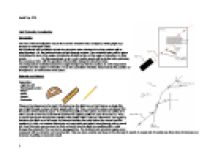 The aim of this investigation was to find out the refractive index of light by shining light rays through a rectangular prism.

To control the position of the prism, we drew an outline of it with a pencil so that we could shift it back into its original position in case it moved (1). Then, a normal was drawn through the middle of the outline with a ruler (2). Afterwards, we began to introduce the light ray at an angle, but always touching the point where the normal met the medium (3). Now, we marked where the ray was before and after it went through with a pencil (4). Now the prism was removed so that we could draw the light ray positions with a ruler through the points (5). We now had a zigzagged line. The incident and refracted angles were measured with a protractor and recorded (6). ...read more.

Sources of error may include the protractor we used, as they might not have been precise enough. Also, the way we marked where the rays were at each refraction could have been erroneous, because the 'X' marks may not exactly mark where the centre of the ray was, so when we traced the overall line through them, the line could have shifted one degree less or more. Improvements can be made, such as simply increasing our concentration and precision while measuring the angles and marking the ray locations. Perhaps a more precise protractor could be used, if accessible. This investigation poses more questions, such as finding out the refractive indexes of light rays through a plethora of media, such as water, alcohol and lead. _________________ http://www.rpi.edu/dept/phys/Dept2/APPhys1/optics/optics/node4.html http://goto.glocalnet.net/ibweb/homepagelink.htm ?? ?? ?? ?? Asaki Tay, C10 1 ...read more.