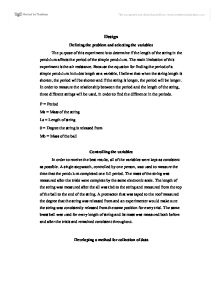 I then released the string from 40 degrees and measured every other period to receive five values, excluding the first period in order to try to limit the human error that is present when the string is released. After completing five trials in this fashion, I proceeded to do five more trials by measuring every period up to five values and then found the average time of the first five trials and the average time of the second five trials to find the time for one period. After completing this process for all three string lengths, I measured the mass of each string and made sure that they remained the same length. When all the data was recorded I continued to process this data. ...read more.