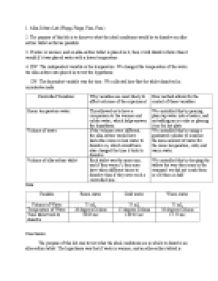 ﻿1. Alka-Seltzer Lab (Plopp, Plopp. Fizz, Fizz.) 2. The purpose of this lab is to discover what the ideal conditions would be to dissolve an alka-seltzer tablet as fast as possible. 3. If water is warmer, and an alka-seltzer tablet is placed in it, then it will dissolve faster than it would if it was placed water with a lower temperature. 4. IDV: The independent variable is the temperature. We changed the temperature of the water the alka-seltzer was placed in to test the hypothesis. DV: The dependent variable was the time. We collected how fast the tablet dissolved in minutes/seconds. ...read more.

Volume of water: If the volumes were different, the alka-seltzer would have had either more or less water to dissolve in, which would have also changed the time it took to dissolve. We controlled this by using a graduated cylinder to measure the same amount of water for the room temperature, cold, and warm water. Volume of alka-seltzer tablet: Each tablet was the same size, and if they weren?t, they may have taken different times to dissolve than if they were each a controlled size. We controlled this by keeping the tablets the way they came in the wrapped: we did not crush them or cut them in half. ...read more.

When a tablet was dropped into warm water, it dissolved within seconds, compared to an approximate minute with the room temperature water, and almost two minutes in the colder water. The reason for this is that the warmer water had faster moving particles, which are able to surround the tablet and dissolve it more quickly compared to the slower moving particles of the colder water. The data supported my hypothesis, suggesting that the warmer the temperature of water an alka-seltzer tablet is placed it, the faster it will dissolve: this was proven by the 15.53 seconds the tablet dissolved under in the warm water, compared to the 1:49.65 seconds the tablet dissolved under in the colder water. Time (seconds) Temperature (Degrees Celsius) ...read more.