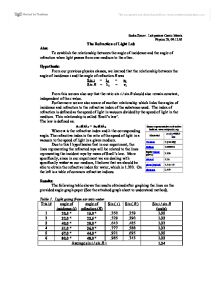 To establish the relationship between the angle of incidence and the angle of refraction when light passes from one medium to the other.

From our previous physics classes, we learned that the relationship between the angle of incidence i and the angle of refraction R was

From this we can also say that the ratio sin i / sin R should also remain constant, independent of the i value.

The law is defined as:

Where n is the refractive index and λ the corresponding angle.

The results we obtained show that on average, we calculated a sin i over sin R to be 1.34 units.  Also we can say

Sources of error could have appeared when fiddling with the pins and the lamp during the experimental procedure.  The thickness of the ray was not ideal and at times too fat to shine onto one single pin.  Also after the ray was refracted, the brightness of the light ray was significantly duller and often very hard to find and trace.

Suggested improvements to the experimental procedure include perhaps using a stronger beam of light (maybe laser) so as to better see the angle of refraction.  Likewise, the room in which the experiment is being carried out could be also darker.  Further investigations could include observing other mediums.  Although in my lab group, we chose to work with water, others were investigating glass, plastic and various oils – all of which would give different data and results.