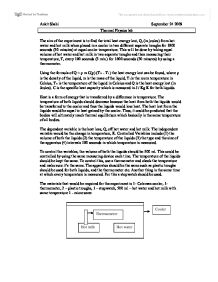 The aim of the experiment is to find the total heat energy lost, Q, (in joules) from hot water and hot milk when placed in a cooler in two different separate troughs for 1800 seconds (30 minutes) at equal cooler temperature. This will be done by taking equal volume of hot water and hot milk in two separate troughs and then measuring their temperature, T, every 180 seconds (3 min.) for 1800 seconds (30 minutes) by using a thermometer.