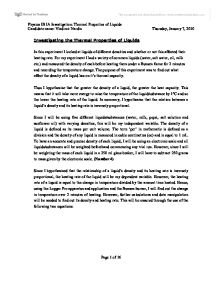 Notes: the numbers at the end of each of the controlled and dependent variables refer to their illustration counter part on the next page and the list of apparatus below. (Diagrams drew by pencil and ruler on a separate page)

Having conceiving the design of my experiment, I was ready to commence collecting raw data. Before any else I measured the mass of each liquid and found their density through calculation. The respective masses and densities of each liquid would be recorded in the following tables.

Note: Microsoft Excel through its calculations automatically rounded each density to the nearest second decimal place.

From the table above you can see that pepsi, waster and milk all have similar densities indicating that maybe their heating rates will be similar to another if all other variables remained controlled (ceteris paribus). From this I chose water as my control for all the other substances/liquids as it is the most common liquid to be found and has a density of 1.00 generally (0.97 cc in this case).

Since Logger Pro will record the change in temperature for every second over a course 2 minutes (120 seconds), I chose an interval of 15 seconds for my raw data and the points to be plotted on my graphs. Thus the following table was constructed for each substance and liquid.

Three trial runs will be conducted for each substance and the average temperature for 0, 15, 30, 45, 60, 75, 90, 105 and a 120 second will be calculated through Microsoft Excel by adding each trial and then dividing the total by three. Following this I set up my apparatus as shown by my diagram. To ensure that I had sufficient gas, I placed the gas conduct on full throttle and turned the Bunsen burner flame to a heating flame (‘blue’ flame, this would be the only that I could do to control the heat output upon the liquid tested). I first started with a 100 ml of water measured using the 100ml-measuring cylinder. Simultaneously, I started the recording of data on Logger Pro and placed the Bunsen burner under the tripod to start my investigation. The recording apparatus had a marginal error of ±0.3°C per second (this is mainly due to the Bunsen burner inaccurate heat output).

±0.3°C for each trial run and liquid tested. Moreover,  a Bunsen burner lets some heat escape, leading to further inaccuracies, whereas a calorimeter is isolated and a controlled environment with no possible outside factors influencing my results. Therefore, a calorimeter would my a viable option for further experimentation.In the set up of my experimentation, I used a clamp stand to hold the substance vertically over the heat source (Bunsen burner). This is both a complicated and inaccurate setup, leading to a higher degree of error. The glass beaker I used is also not ideal. Glass is very malleable under intense heat and could crack or break possibly leading to injuries. Thus for further investigation the use of a calorimeter (made from plastic or any other insulated material) would be a more viable option for more accurate results, analysis and conclusion.Finally, to further reduce error in my analysis, I should have completed 5 trials instead of 3 for each of substance. Also, I should have let each trial run for 3 minutes instead of 2, to more accurately measure the change in slope over time and write a more comprehensive and detailed analysis. These controlled variable would be needed to take into account in further investigation.The density of the substances used are too similar, especially those of water and Pepsi. I should have chosen liquids with a larger density range for the experiment to be conclusive. Further research should have been done, on which liquids to employ for the expirement. However, in further experimentation I could look up the densities for each of the substances used in order to ensure that my investigation and analysis is conclusive and accurate.Taking these errors into account, I may have been able to improve on them in a number of ways in order to further support my conclusion, or even disprove it.
...read more.