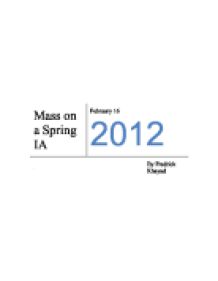 This investigation asks the question of what the effect of changing the mass on the period of oscillation of a mass on a spring.

This investigation asks the question of what the effect of changing the mass on the period of oscillation of a mass on a spring.

The independent variable is the time for one period of oscillation. The time for five period oscillations will be measured in seconds which will be recorded through the utilisation of a stopwatch.

The dependent variable is the mass that will be added to the spring to investigate its effect on for five period oscillations. Brass weights were used within this practical.

The original brass weight with mass of 0.05kg, has the uncertainty of

Depending on whether which is greater, that will be the value used for the uncertainty.

Hence, resulting in the uncertainty of ±0.35

The scales were only limited to <400g, thus resulting in a greater uncertainty for all the masses above 400.

Utilise a stool with a flat surface, and secure the retort stand in place with a heavy object to stop the swaying of the spring.

Use a scale with a higher limitation.

Parallax Error decreases the accuracy of the recordings.

Try to have the reader, read the measurements at eye level so the readings are as accurate as possible, also the reader must be in a comfortable position to prevent them from reading an angle.

With very limited trials, in this case 5, the measurements are limited in terms of accuracy.

Perform more than 5 trials, 10 being the most, this will help reduce the chances for random error.