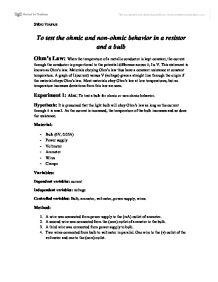 Ohm’s Law: When the temperature of a metallic conductor is kept constant, the current through the conductor is proportional to the potential difference across it; I α V. This statement is known as Ohm’s law. Materials obeying Ohm’s law thus have a constant resistance at constant temperature. A graph of I (current) versus V (voltage) gives a straight line through the origin if the material obeys Ohm’s law. Most materials obey Ohm’s law at low temperatures, but as temperature increases deviations from this law are seen.

Experiment 1: Aim: To test a bulb for ohmic or non-ohmic behavior.

Hypothesis: It is presumed that the light bulb will obey Ohm’s law as long as the current through it is small. 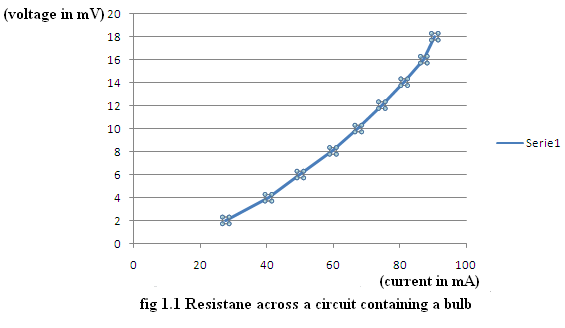 Experiment 2: Aim: To test a resistor for ohmic or non-ohmic behavior.

Improvement: In this experiment, the ohmic or non-ohmic behavior was tested using only one bulb and one resistor. For a better conclusion it might be reasonable to test ohm’s law with more than one bulb and resistor.

Conclusion: Experiment one: From the discussion and introduction, it could be concluded that the bulb shows a non-ohmic behavior since with increasing current, the temperature inside it increases and so does the resistance. The hypothesis is in agreement with the result, except for the fact that in this case, the bulb does not show any ohmic behavior initially either.

Experiment two: As mentioned earlier in the discussion, the resistor shows an ohmic behavior since increasing current does not lead to a significant increase in temperature in this case, and hence the resistance remains constant throughout the experiment. The hypothesis holds true with respect to the result gained from the experiment.