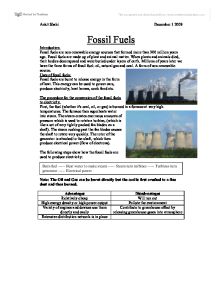 Fossil fuels are non-renewable energy sources that formed more than 300 million years ago. Fossil fuels are made up of plant and animal matter. When plants and animals died, their bodies decomposed and were buried under layers of earth. Millions of years later we have the three forms of fossil fuel: oil, natural gas and coal. A form of non-renewable source. 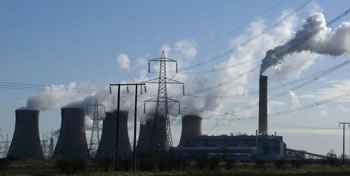 Fossil fuels are burnt to release energy in the form of heat. This energy can be used to power cars, produce electricity, heat homes, cook food etc.

The procedure for the conversion of the fossil fuels to electricity.

First, the fuel (whether it's coal, oil, or gas) is burned in a furnace at very high temperatures. The furnace then superheats water into steam. The steam creates enormous amounts of pressure which is used to rotate a turbine, (which is like a set of very tightly packed fan blades on a shaft). The steam rushing past the fan blades causes the shaft to rotate very quickly. The rotor of the generator is attached to the shaft, which then produce electrical power (flow of electrons). 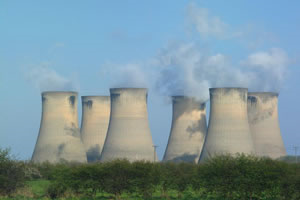 The following steps show how the fossil fuels are used to produce electricity:

Note: The Oil and Gas can be burnt directly but the coal is first crushed to a fine dust and then burned. 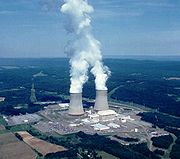 The more neutrons that are present in the nuclear reactor the more fission will produce thus more energy would be gained. This is called a chain reaction. to continue a chain reaction, minimum mass of uranium – 235 must be present. This is the critical mass. If the critical mass is not provided, the neutrons will escape. Also, the uranium could only capture the neutrons if they are slow. To do this, a moderator is used. This material surrounds the fuel rods (contains uranium – 235). The control rods are also used; these are present so that they can absorb excess neutrons, and they also ensure that the energy from the nuclear reaction is released in a slow and controlled rather than uncontrolled which would take place in a nuclear weapon.

The energy released is in the form of kinetic energy, which gets converted to thermal energy( in the moderator) as the neutrons are slowed down by collisions with the moderator atoms. A coolant is then used, which can extract this energy, and use I as a heat exchanger to turn water into steam at high temp. and pressure. The steam can then be used to turn the turbines, and finally producing electricity.

Energy transfer during the procedure: 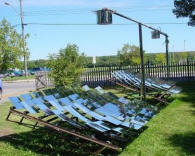 Solar power generates electricity by using sunlight. Solar cells or photovoltaic cells are devices that convert radiant energy into the electrical energy, but this is direct. Sunlight can be converted to heat first and then to electricity. In this case it is indirect since the sunlight is used as a heat to boil water first and then provide electricity.

The procedure for the conversion of solar power to electricity.

Photovoltaic cell directly converts light energy into electricity at atomic level. This is due to the photoelectric effect that causes them to absorb photons of light and release electrons. When these free electrons are captured, electric current results, that is electricity (Passive solar)

Another way is to use the solar panels (Active solar); they are basically thermal collectors, which heats a liquid (water mainly) and then pass the heated liquid through the heat exchanger to produce heat for a building.

The energy transfer can be seen:

Solar Furnaces use a huge array of mirrors to concentrate the Sun's energy into a small space and produce very high temperatures.

Other uses include: Solar cells provide the energy to run satellites that orbit the earth.

Water is pumped down an "injection well", filters through the cracks in the rocks in the hot region, and comes back up the "recovery well" under pressure. It "flashes" into steam when it reaches the surface. If the steam is not purified then it would ruin the turbine blades.

Wave power is the transport of energy by ocean surface waves, and the capture of that energy to do useful work — for example for electricity generation.

At a wave power station, the waves arriving cause the water in the chamber to rise and fall, which means that air is forced in and out of the hole in the top of the chamber. The turbine placed in this hole, is turned by the air rushing in and out. The turbine turns a generator. 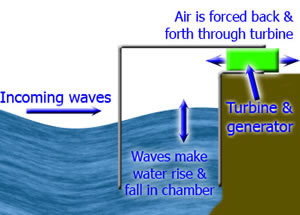