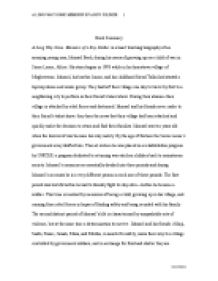 ﻿A LONG WAY GONE: MEMOIRS OF A BOY SOLDIER Book Summary A Long Way Gone: Memoirs of a Boy Soldier is a heart touching biography of an amazing young man, Ishmael Beah, during his years of growing up as a child of war in Sierra Leone, Africa. His story begins in 1993 while in his hometown village of Mogbewemo. Ishmael, his brother Junior, and his childhood friend Talloi had started a hip-hop dance and music group. They had left their village one day to travel by foot to a neighboring city to perform in their friend?s talent show. During their absence their village is attacked by rebel forces and destroyed. Ishmael and his friends never make to their friend?s talent show; they hear the news that their village had been attacked and quickly make the decision to return and find their families. Ishmael was ten years old when the horrors of war became his only reality. By the age of thirteen the Sierra Leone?s government army drafted him. Then at sixteen he was placed in a rehabilitation program by UNICEF, a program dedicated to returning war-stricken children back to mainstream society. Ishmael?s memoirs are essentially divided into three periods and during Ishmael?s accounts he is a very different person in each one of these periods. The first period was his life before he had to literally fight to stay alive?before he became a soldier. This time is marked by memories of being a child, growing up in his village, and running from rebel forces in hopes of finding safety and being reunited with his family. The second distinct period of Ishmael?s life is characterized by unspeakable acts of violence, but at the same time a determination to survive. Ishmael and his friends: Alhaji, Saidu, Kanei, Jumah, Musa, and Moriba, in search for safety, make their way to a village controlled by government soldiers, and in exchange for food and shelter they are recruited into the army. ...read more.

Erikson (1968) claimed, ?the adolescent puts his trust in peers and leading, or misleading elders who will give scope to their aspirations? (p.129). Ishmael soon aspires to avenge his family and becomes a cold killer in the process. His elder at the time, Lieutenant Jabati, exploits this aspiration and encourages the idea of revenge. The events that follow quickly change Ishmael forever. As he put it ?our days were replaced with more soldiery things? (Beah p.121). For example, Ishmael is given a gun shortly after his recruitment. At first he is frighten by the object, but it isn?t long before the gun becomes his only source of comfort and he doesn?t feel complete without it. In the beginning of Ishmael?s story he keeps count for his brother and Talloi while they compete in a push-up competition (Beah p.9). These types of activities are soon replaced by how fast they could clean their guns. They used to congratulate each other for scoring a goal in a game of soccer by giving each other high fives. After their recruitment they give each other high-fives for a successful or brutal kill. Instead of discussing hip-hop music, their conversations turned to how good the drugs were and how brutal their killings had been (Beah p.128). It is not hard to see how Ishmael?s identity changed when he became a soldier. Ishmael had found security within his squad, protection from the everyday threat of being killed. For him, it seemed that he had found some sense of direction. ?the forests that we slept in became my home. My squad was my family, my gun my provider and protector, and my rule was to kill or be killed. The extent of my thoughts didn?t go much beyond that?killing had become a daily activity?my childhood had gone by without my knowing (Beah p.126). Ishmael had become a killer and part of a ?brotherhood? as Lieutenant Jabati had claimed (Beah p.129). ...read more.

Unlike before, when he was afraid of his own thoughts and did not want to think about where his life was going, he enjoyed thinking about the future because he was confident that his future could not be any worse than his past had been. Ishmael had been rehabilitated, but the war was still very much a reality. The conflict soon made its way to Freetown and gunshots would break the silence of the night, silence that Ishmael had come to enjoy. Ishmael?s uncle becomes sick and death soon follows. The army, which now consisted of soldiers from the Sierra Leone government and the rebel forces, were shooting people in the streets of Freetown. Ishmael was faced with a decision, either find his way to New York, or return to the horrors of being a child soldier. A woman, Laura, had befriended Ishmael while he was in New York and assured him that he could stay with her if he could make it out of Sierra Leone. Ishmael packed a bag, gathered the little money that he had saved, and headed out of the country. He barely made it out of Sierra Leone, but managed to do so. Ishmael had escaped the possibility of becoming a soldier again, and this gave him comfort. Ishmael?s biography ends here, but his journey does not. Ishmael is passionately involved in many human rights organizations, advocating for children that share his story. Ishmael used to love hearing about the history of Ethiopia from Leslie during his many visits to the rehabilitation center. He especially enjoyed the story of the meeting of King Solomon and Queen of Sheba. He related to the long distances that they had traveled and their determination to reach their goals. ?I wished that my journey had been as meaningful and as full of merriment as theirs? (Beah p.164). While Ishmael?s journey may not have been as full of merriment as King Solomon and Queen of Sheba?s journey, his journey was just as meaningful. He is a model of true resilience in the face of extreme adversity. ...read more.