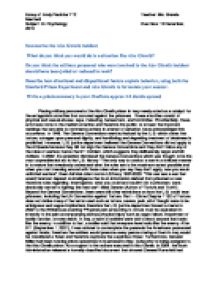 Abu Ghraib Psychology Essay. What do you think you would do in a situation like Abu Ghraib? Do you think the military personnel who were involved in the Abu Ghraib incident should have been jailed or reduced in rank?

Summarize the Abu Ghraib incident What do you think you would do in a situation like Abu Ghraib? Do you think the military personnel who were involved in the Abu Ghraib incident should have been jailed or reduced in rank? Describe how situational and dispositional factors explain behavior, using both the Stanford Prison Experiment and Abu Ghraib to formulate your answer. Write a pr�cis summary in your OneNote approx 1-2 double spread. Placing military personnel at the Abu Ghraib prison in Iraq merely acted as a catalyst for the antagonistic atrocities that occurred against the prisoners. These atrocities consist of physical and sexual abuses, rape, molesting, harassment, and homicides. Providentially, these acts have come to the media's attention and therefore the public, or at least the important rankings that are able to commence actions in attempt of salvation, have acknowledged this occurrence. In 1949, The Geneva Conventions were authorized by the U.S. which states that torture, outrages upon personal dignity, and humiliating and degrading treatment of detainees is prohibited. However, U.S. justice department believed the Geneva Conventions did not apply to the Al Qaeda because they did not sign the Geneva Conventions and they don't follow any of the rules of warfare; hence the 911 incident, which suggests they deliberately target and kill civilians. ...read more.

The guards would hang people by their hands in positions unbearable for even 5 minutes causing them to scream after 30-60 minutes, subsequently the guard stated "now that is the music I want to hear". They would not allow sleep for 5 nights, strip guards and forcing them to have oral sex with each other. They were dragged on the floor while being nude therefore the genitals were being scraped while being dragged, and they were stacked on top of each other while nude forced each other's genitals to have contact. Moreover, a progress report was issued of the soldiers who said they were doing a good job and performing well and that they should continue doing whatever it is they were doing. This progress report therefore acted as an encouragement for the techniques used. There was an incident regarding a dead man claimed to have died from a heart attack however in fact he was murdered. That being said, Grainer and Sabrina (two soldiers) were imprisoned for taking a photo and being in a photo involving that dead person but none were brought to trial for committing the murder. ...read more.

Also, the rules of Rumsfeld suggested that these extreme techniques were allowed. The norm of guards is expected to demonstrate actions to represent authority or power through attempts of degradation hence the situation that occurred in Abu Ghraib. In correlation to this, the Stanford experiment was a representation of demonstrating authority and power through situational factors. 24 students were divided into the roles of either guards or prisoners. The experiment ended the 2 week experiment in less than a week because it got carried away and caused mental defects. Guards were starting to strip, hood, and forcing them to simulate sodomizing one another. We can explain the reasoning behind these actions through situational factors. They were assigned a role of guards which usually conduct actions to establish power oppressed upon prisoners. Each day, the extent to which the guards would go to in order to convey authority and power would intensify therefore Abu Ghraib may be seen as an aggravated replication of the Stanford Experiment seeing as how in Abu Ghraib the military personnel were influenced by both dispositional and situational factors whereas the guards in the Stanford Experiment were only exposed to situational factors. ?? ?? ?? ?? Essay of: Andy Pasricha Y12 Teacher: Mrs. Brenda Manfredi Subject: HL Psychology Due Date: 12 December, 2010 ...read more.