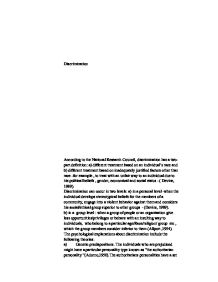 Discrimination According to the National Research Council, discrimination has a two-part definition: a) different treatment based on an individual's race and b) different treatment based on inadequately justified factors other than race -for example , to treat with an unfair way to an individual due to his political beliefs , gender, economical and social status -( Devine, 1989). Discrimination can occur in two levels: a) in a personal level -when the individual develops stereotypical beliefs for the members of a community, engage into a violent behavior against them and considers his social/ethical group superior to other groups - (Devine, 1989). b) in a group level : when a group of people or an organization give less opportunities/privileges or behave with an insulting way ...read more.

Thus, an individual with an authoritarian personality has high-possibilities to engage into discriminatory actions against out-group members (Adorno, 1950). b) The realistic group conflict theory: The competition between groups could develop into prejudice (Fiske, 1998). In a study the boys in a summer camp were divided into two groups and lived in different huts. During the first stage of the study the two groups worked separately, but very quickly the boys developed a strong team spirit that rapidly developed into hostility towards the other group. Near the end of the study, the boys developed a very negative attitude against the other group and engaged into prejudiced actions and discriminatory behaviors According to the realistic group conflict theory, the cause of prejudice and discrimination is the existence of different groups who are in conflict or competition with each other (Fiske, 1998). ...read more.

Furthermore, according to the Social Identity theory, an individual's social identity is tied in with his group membership (LaPiere, 1934) .The position of a group where an individual belongs determines his self-esteem (LaPiere, 1934) .This leads an individual to make group comparisons in order to raise his self-esteem( LaPiere, 1934). The need for a high-esteem can make an individual to perceive his group us superior and maximize the differences between his group and the members of other groups (LaPiere, 1934). To conclude, discrimination always existed and will exist if we stay passive. The nation, family, schools, universities, Media and each individual should formulate an action plan in order to reduce discrimination. But firstly, each of us should be aware of his own prejudices and try (via rational thought) to free himself from them. Discrimination hurts and benefits no one. ...read more.