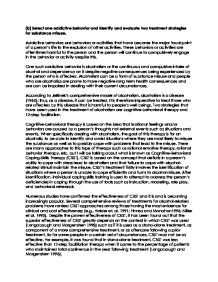 (b) Select one addictive behavior and identify and evaluate two treatment strategies for substance misuse. Addictive behaviors are behaviors or activities that have become the major focal point of a person's life to the exclusion of other activities. These behaviors or activities are oftentimes harmful to the person and the person will continue to compulsively engage in the behavior or activity despite this. One such addictive behavior is alcoholism or the continuous and compulsive intake of alcohol and dependency on it despite negative consequences being experienced by the person who is affected. Alcoholism can be a form of substance misuse and people who are alcoholics are prone to have negative long term health consequences and are can be impaired in dealing with their current circumstances. According to Jellinek's comprehensive model of alcoholism, alcoholism is a disease (1960); thus, as a disease, it can be treated. It is therefore imperative to treat those who are affected by this disease that is harmful to people's well beings. ...read more.

CBST's treatment firstly involves the identification of situations where a person is unable to cope efficiently and turns to alcohol misuse. After identification, individual coping skills training is used to attempt to address the person's deficiencies in coping through the use of tools such as instruction, modeling, role play, and behavioral rehearsal. Numerous studies have confirmed the effectiveness of CBST and it is and is becoming increasingly popular. Several comprehensive reviews of treatments for alcohol-related problems have ranked CBST approaches among those having the most evidence for clinical and cost effectiveness (e.g., Holder et. al. 1991; Finney and Monahan1996; Miller et al. 1995). Despite the proven effectiveness of CBST, it has been found out that the superior effectiveness of CBST greatly depends on the context in which CBST was used (Longabaugh and Morgenstern 1998) such as if it is used as a stand-alone treatment, as component of a more comprehensive treatment, or as aftercare following a prior treatment. ...read more.

Despite the popularity of 12-step facilitation, it has not particularly been documented in well-controlled studies and studies utilizing randomized trials. Thus, it can be said there is a lack of totally concrete and sound empirical evidence. A disparity exists between the popularity of a treatment and its demonstrated effectiveness (Hester and Miller 1995). In conclusion, even though both treatments are shown to be proven effective in one way or another I believe that CBST is more effective overall as a generalized treatment of alcoholism over 12-step facilitation. CBST has a stronger basis in the field of Psychology and has more documented studies that verify its effectiveness. More research simply must be done to identify the most effective context in which to administer CBST. 12-step facilitation has its advantages and is very popular but its effectiveness isn't as well documented as other treatments in terms of studies. In addition, it may not work for many people because of its nature; it requires membership and life-long commitment to the organization and it is spiritual, which some people may not be able to identify with. ...read more.