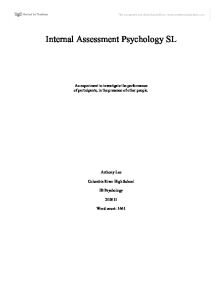 An experiment to investigate the difference in performance of participants doing a puzzle alone and in the presence of other people.

Internal Assessment Psychology SL An experiment to investigate the performance of participants, in the presence of other people. Anthony Lee Columbia River High School IB Psychology 2/18/11 Word count: 1661 Abstract One of the first studies of social influence was performed in 1898, when Norman Triplett showed how children who were asked to turn a fishing reels as fast as they could would spin the wheel faster if there were other children in the room. This effect was actually called social facilitation, as it seemed that the task was made easier, or facilitated, by the presence of others. The aim of this experiment was to discover if this statement is true. The experiment was conducted using eighteen first grade students, 10 girls and 8 boys, where the average age was seven years. The participants were brought into a familiar classroom where they were expected to solve a Chinese puzzle. The same groups of children were exposed to two different conditions, where they in the first case worked alone when they solved the first puzzle, and in the second case they worked in pairs without collaboration, solving the second puzzle. The aims stated that an improvement in performance could be produced by the mere presence of conspecifics. ...read more.

They believed that I was there to visit them and that this was only a game. The same group of participants was used under the two given conditions; first working alone, and then working in pairs in the presence of conspecifics. Materials Wristwatch Two different puzzles Procedure All data was collected in the same day, in the morning and in the afternoon. The researcher first met the first grade class, and presented herself to the participants before carrying out the experiment. The first puzzle was then assembled in a parallel class-room to the participants' own one. The participants were brought into a parallel class room to their own one, and were read standardized instructions. Under the first condition when the participant was alone: "What you see here is a puzzle, you will use these pieces in order to solve the puzzle as fast as you can. If it seems too difficult, you may then stop". Under the second conditions where they worked in pairs: "What you see here is a new puzzle. You will once again get to use the same pieces as before, and I want you to solve the puzzle as fast as you can, without helping your friend, or looking at their puzzle. ...read more.

the puzzles had been more complex and more difficult to solve, thereby the participants' true performance would occur, or even the other way around, the puzzle maybe should have been even easier in order to create the appropriate level of impact. Although the researcher tried to prevent the participants from feeling like they were being watched, the mere presence of the researcher herself can have affected the results. Another factor, can actually be the fact of evaluation apprehension, which means that anxiety is created by an individual's concerns about being judged or evaluated by others. Concerns about what others will think about us can produce either social facilitation or social inhibition effects. It might be very possible that the presence of the others in the second condition, when the participants were paired up, has affected their level of impact and thereby their performance. Instead for the participants to even work faster and solve the second puzzle quicker than the first time, it took more time for them to finish the task. In some cases rivalry among participants leads to better performances and better results in their accuracy, but in the case of this experiment rivalry created tress and the participants became overly affected. This created even more anxiety and the solving of the puzzle in the presence of another, became difficult and resulted in lower performance. ...read more.