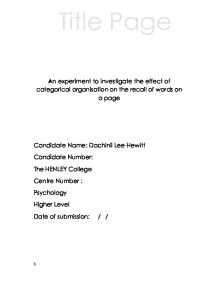 An experiment to investigate the effect of categorical organisation on the recall of words on a page Candidate Name: Dachinii Lee-Hewitt Candidate Number: The HENLEY College Centre Number : Psychology Higher Level Date of submission: / / There have been two main types of memory found so far, long term memory (LTM) and short term memory (STM). In short term memory a process called 'Chunking', where new information is related and integrated to our LTM, has been proven to increase STM capacity. Chunking is basically when we give new information a new structure to make it easier to remember. (Cited in Organisation of memory booklet - Baddeley, 1990) It has been found that memory is highly organised, so much so that the more organised it is the better it is remembered, Categorical Clustering is the term for this phenomenon (Cited in Organisation of memory booklet - Bousfield, 1953). Bousfield gave the subjects of his experiment 60 words, of four categories, in an unorganised structure. It was discovered that when they were asked to free-recall the words, most had organised them into categorical clusters. Experiments with more mundane reality also supported this theory, such as Ruben and Olson (1980), cited in Organisation of memory booklet. They asked students to recall as many names of staff as they could remember and many of them recalled the names by the department in which that staff member worked within. There is insufficient evidence to support the theory that organisation causes a higher amount of recall but there is a correlation between them both. ...read more.

The forms are then collected in the same way as handed out 6. All the participants are thanked "Thank you for completing the consent forms, nevertheless if you have chosen not to sign the consent form then you have been automatically been withdrawn from the following study" 7. Each participant is given a blank piece of paper to write on (group A will receive a blank page with a small A on it, and group B will have a B on their piece of paper) 8. One of the experimenters opens the document with the words on (organised for group A/non-organised for group B) followed by "you will now be shown a slide on this screen, and please do not write anything down yet" 9. The slide is shown for 3 minutes 10. "Please can you now write down as many words as you can remember" 11. The participants are given 4 minutes to write down the recalled worlds 12. The sheets of paper are collected in by one of the experimenters 13. The Debriefing Form is handed out to each participant 14. Finally, the participants are thanked for their participation Appendix 3 Debriefing form Thank you for your participation. The purpose of this study was to investigate the organisation of memory, and replicated Bower's original experiment. As a participant, you have the following rights: * You may withdraw your data at any time * Your data will be held in strict confidentiality * There will be no psychological or physical after-effects If you would like to withdraw your data, or have any other questions about the nature of the study, please contact us via: Email: [email protected] or [email protected] No: 0788 069 29 08 ?? ?? ?? ?? 1 ...read more.