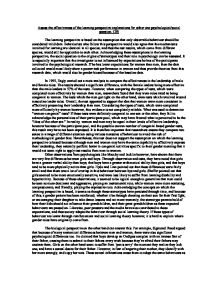 Assess the effectiveness of the learning perspective explanations for either one psychological/social question.

Assess the effectiveness of the learning perspective explanations for either one psychological/social question. (20) The learning perspective is based on the assumption that only observable behaviour should be considered valid data. Behaviorists who follow this perspective would also agree that the mechanisms involved for learning are identical in all species, and thus the test results, which come from different species, would still be applicable to each other. Acknowledging these assumptions in the learning perspective, the social question to the origins of stereotypes and their role in psychology can be assessed. It is especially important that the investigator is not influenced by expectations he has of the participants involved in the psychological research. If he has lower expectations for women than men, then the data collected would most likely show a poorer task performance in women and thus provide theories from this research data, which would also be gender biased because of the baseline data. ...read more.

express their leadership, they naturally perform better in congenial activities specific to their gender meaning that it would not seem right to apply test results from men to women. Other observations from psychologists like Maccby and Jacklin however, have shown that there are very few differences between girls and boys. Through observation and tests, they have noted that girls have a greater verbal ability than boys, that boys have a greater arithmetical ability than girls, and that boys tend to be more physically active than girls. Hyde and Linn pointed out that these differences were fairly small and that there was a lot of overlap in this behaviour between bys and girls. Shaffer pointed out that girls seemed to be more emotionally sensitive, and were less likely to suffer from learning disability and hyperactivity. Because of these observations, it seemed to be logical enough to generalize that men could be seen as more dominant and aggressive, playing an instrumental role, while women were more nurturing, compassionate, and friendly, playing the expressive role. ...read more.

These sexual infatuations cause them to adopt the same behaviours as their same-sex parental figure. In addition, because of "penis envy" he proposed that this is what influenced the women's obsession with physical vanity in an attempt to compensate for their original sexual inferiority Other explanations for specific-gender-related behaviour through the anatomy of a human include evolutionary explanations in which the males have generally been equipped with better physical strength, aggression and ability to hunt. Because of this, women may have automatically been pushed into work, which serve the men, thus developing their compassion for children and other art-based projects, as they were not thought to be as strong and skillful enough to hunt. It has been though that male hormones, especially testosterone have helped during prenatal development to increase the masculinity of the brain, therefore making men smarter than girls in some aspects. In addition, since men have a higher metabolic rate, they are more able to maintain less body fat, therefore giving the appearance of being fitter than women and earning the gender stereotype of being stronger than girls. ...read more.