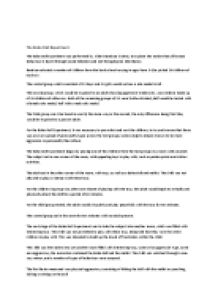 ﻿The Bobo Doll Experiment. The Bobo Doll experiment was performed by Albert Bandura in 1961, to explore the notion that all human behaviour is learnt through social imitation and not through gene inheritance. Bandura selected a number of children from the local school varying in ages from 3-6,he picked 36 children of each sex. The control group which consisted of 12 boys and 12 girls would not see a role model at all. The second group, which would be exposed to an adult showing aggressive tendencies, was similarly made up of 24 children of either sex. Both of the remaining groups of 12 were further divided; half would be tested with a female role model, half with a male role model. The third group was structured in exactly the same way as the second, the only difference being that they would be exposed to a passive adult. ...read more.

The control group sat in the room for ten minutes with no adult present. The next stage of the Bobo Doll Experiment was to take the subject into another room, which was filled with interesting toys. The child was not permitted to play with these toys, being told that they were for other children to play with. This was intended to build up the levels of frustration within the child. The child was then taken into yet another room filled with interesting toys, some of an aggressive type, some non-aggressive; the room also contained the Bobo doll and the mallet. The child was watched through a one-way mirror, and a number of types of behaviour were assessed. The first factor measured was physical aggression, consisting of hitting the doll with the mallet or punching, kicking or sitting on the doll Verbal aggression was also assessed, whether it was general abuse or an imitation of phrases used by the adult role-model. ...read more.

Male subjects exposed to non-aggressive role models were less likely to use the mallet to hit the Bobo doll. Strangely, male subjects placed with non-aggressive female models were more likely to use the mallet than the control group. CONCLUSION. Bandura found that girls were much less likely to be physically violent, but were equally as prone to verbal aggression as boys. There were a few criticisms of the experiment; the Bobo doll springs back upright when it is hit and there is a strong possibility that the children saw it as a game rather than anything else. There was a follow up experiment, in 1963, which used the same methodology as the initial experiment of the Bobo Doll Experiment, in 1965. It establish the effects of rewarding or punishing bad and violent behaviour. Children, who witnessed the model being punished for aggressive behaviour, were much less likely to follow suit. Interestingly, there was no change in aggression when the model was rewarded for bad behaviour. ...read more.