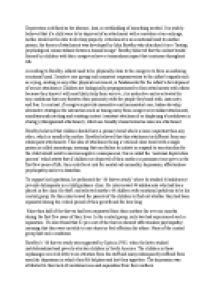 ﻿Deprivation is defined as the absence, loss, or withholding of something needed. It is widely believed that if a child were to be deprived of an attachment with a caretaker at an early age, he/she would not be able to develop properly. Attachment is an emotional bond to another person; the theory of attachment was developed by John Bowlby who described it as a "lasting psychological connectedness between human beings" Bowlby believed that the earliest bonds formed by children with their caregivers have a tremendous impact that continues throughout life. According to Bowlby, infants need to be physically close to the caregiver to form an enduring emotional bond. ...read more.

Bowlby believed that children should have a primary bond which is more important than any other, which is usually the mother. Bowlby believed that this attachment is different from any subsequent attachments. This idea of attachment being a vital and close bond with a single person is called monotropy, meaning that any failure to initiate or respond to any stimulus for the child would result in serious negative consequences; this is called the ?maternal deprivation process? which states that if children are deprived of their mother or prominent care giver in the first few years of life, they could be at risk for mental sub normality, depression, affectionless psychopathy and even dwarfism. ...read more.

None of the control group had such conditions. Bowlby?s ?44 thieves study was supported by Spitz in 1945, when the latter studied institutionalized and poverty-stricken children in South America. The children in these orphanages received little to no attention from the staff and many subsequently suffered from anaclitic depression in which they felt helpless and lost their appetites. The depression was attributed to their lack of emotional care and separation from their mothers. Spitz later conducted another study with Wolf the next year which studied 100 children who became seriously depressed after staying in hospital. Those who had been separated from their mothers for less than three months were found to have recovered earlier and better than those who had been separated for months at a time. http://psychology4a.com/attach%208.htm http://www.psychology.sunysb.edu/attachment/online/inge_origins.pdf http://childsrighttothrive.org/topics/socioemotional-development/what-are-effects-early-severe-deprivation-attachment http://www.simplypsychology.org/bowlby.html ...read more.