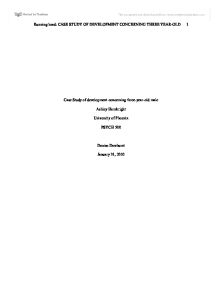 Case Study of development concerning three-year-old male Ashley Hambright University of Phoenix PSYCH 500 Denise Dewhurst January 31, 2010 Case Study of development concerning three year-old male Choosing a child of preschool age to conduct a study is a rather daunting and meticulous task. The child I chose to observe provided immense insight into all aspects of life-span development particular to his age. Interestingly, this child comes from a background of fascinating anomaly. For the purpose of identity, the child is referred to as Mason. Mason is a three-year-old in a family of five children. His mother and father bring to the marriage and family nucleus, each a child of his and her own. The father has a son of age 16 from a previous relationship, and the mother, an eight-year-old son from a previous relationship. The third child in the family, Mason has two half-brothers older than him. Another point of interest with regard to Mason's family, his father is seven years the mother's senior. The mother is 13 years the oldest son's senior; according to the father making it difficult at times for the 16 year old and mother to agree and build their relationship. The eldest son is a typical teenage boy whereas the eight-year-old is diagnosed as ADD and slightly autistic. ...read more.

When the mother decided to place Mason in the time out chair, Mason defiantly stood from his chair and walked back to his initial location. Numerous times, the mother would take him to his time out chair, each time challenged by Mason. Finally, the mother spanked Mason and placed him on the chair, causing Mason's defiance to alter to absolute ear-piercing screaming. Mason, unfortunately, could not self-calm resulting in his mother aiding in the process. I observed Mason to be picky in his eating, yet only wanting considerably unhealthy items. This could attribute to his moderately large size. Weighing near 45 pounds at three could be an issue as Mason further develops physically. According to John Santrock, each child's diet needs to be considered important as what a child eats can affect various aspects of his or her physical health development and eating habits are embedded in the early ages of life, influencing future habits and body weight (2007). The article Preschoolers' Dietary Behaviours: Parents' Perspectives, childhood obesity is linked to several disorders and diseases, and with obesity on a rise and one in four preschool-age children being classified obese, current calculations propose 26% to 41% of obese preschoolers, will be obese adults (Tucker, 2006). Mason lacks appropriate exercise and according to his grandparent, spends entirely too much time watching TV. ...read more.

It is quite possible that the strategies above will also lessen Mason's aggressive behavior. Many times a child who is aggressive is signaling his need and desire for help. Conclusion If the parents, family, educators work together to benefit Mason and they stay committed to monitoring his progress, noting any problems that arise, and referring him to specialists on a needs basis; I predict Mason to flourish and gain in his development significantly from his current age to thirteen. A positive aspect is Mason is three, still in a very moldable and influential stage. With appropriate assistance, Mason can reach his optimal development. Through nurture and positive support systems, he can grow into a remarkable adolescent. In Mason's case, it is not too late to learn new skills and abilities. It is not too late for Mason to further develop his language, enhance his working memory, and become a more sociable child with less aggression. Falling through the cracks can be prevented for Mason, only as long as his support system continues to be concerned. If his support system detaches and loses interest in Mason's development, he may become a violent criminal, will low cognitive ability, illiterate, unhealthy, and morbidly obese. If such is the case, the blame does not fall on Mason, but rather on his support system. After all, Mason is three, thus remains dependent upon those close to him to guide him in his development. ...read more.