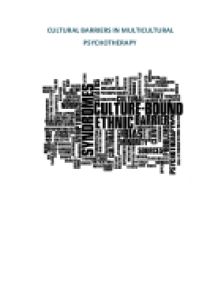 ﻿CULTURAL BARRIERS IN MULTICULTURAL PSYCHOTHERAPY C ultural barriers are sources of bias that can play a significant role in the effectiveness of multicultural psychotherapy. Culture-related, class-related, and language-related barriers are three major (and over-lapping) sources of potential bias identified in the seminal writings of Derztld W. Sue and David Sue. Each source of bias can produce problems that may affect the initiation, continuation, and success of psychotherapy. Among the problems that may arise are the misinterpretation of a client's cultural norms as symptoms of a disorder: misunderstanding of culture-bound syndromes and socio-political reasons for client behavior: and the misuse of interpreters. Culture comprises the values, beliefs, and norms that are shared by a group of people. such as a racial on ethnic minority. Culture influences how people think about, act on, and see the world. Traditional psychotherapy theories and the mainstream European American/Caucasian culture in the United States (referred to as "Caucasian culture") share common values and beliefs that can be barriers in multicultural psychotherapy. Examples of these commonalities are the emphasis placed on the use of standard English. direct verbal expression, and long-term goals: the distinction between physical and mental well-being: and the determination of cause?effect relationships. CULTURE-RELATED BARRIERS Culture-related barriers in psychotherapy stem from cultural differences between therapists (who are predominantly Caucasian in the United States) and their clients. ...read more.

value indirectness and subtlety in communication. Many cultures prefer not to be so straightforward in questioning and responding, and this may lead the therapist to a negative interpretation of the client?s behaviour (e.g., the client is nonresponsive and withdrawn). Distinctions between mental and physical health are generally more clearly marked for Caucasians than for non-Caucasians. Non-Caucasian cultures are less likely to separate the mind and body and may be confused by the distinction in traditional psychotherapy. These clients may expect to receive the kind of treatment typically provided by physicians and the clergy. This includes immediate and tangible solutions such as advice and medication. Traditional therapies are more ambiguous and long term and tend to be less consistent with the expectations of non-Caucasian cultures. Culture-bound syndromes can also play a role in creating cultural barriers in therapy. Some syndromes seem to exist only in certain cultures, and they may be mistakenly viewed as indicative of pathology. For example, many Latinos believe in the evil eye, a syndrome of distress also known as ?mal de ojo?). Patients with this syndrome believe that when a person is given the evil eye by another, he or she will experience misfortunes in his or her career, love, and family life. In this case, the therapist may incorrectly conclude that the client is paranoid because of the client?s perceived preoccupation with people causing him or her harm. ...read more.

Nonverbal communication differences occur in the areas of proxemics (personal space), kinesics (bodily movements), paralanguage (vocal cues, e.g., vocal inflections), and high- and low-con-text communication. High-context communication relies heavily on nonverbal messages, whereas low-context communication relies more on verbal messages. Misunderstandings can result from differences in nonverbal messages?for example, a therapist may mistakenly assume that a Latino client?s lack of eye contact is indicative of unassertiveness or depression, although the behaviour may be a culturally related sign of respect. When a therapist uses an interpreter, several problems may occur. For example, the interpreter may not translate accurately, especially when it comes to mental health concepts that vary in meaning across cultures, and there may be concerns about dual relationships and loss of confidentiality. When a family member is used as an interpreter, his or her own concerns may affect the information that is transmitted and thus the power balance. Ideally, the interpreter is trained professionally. The interpreter should be fluent in both languages and know and understand the terminology the therapist uses. Moreover, the therapist and interpreter should meet before and after a counseling session with a client to answer any questions the interpreter may have and to review the important aspects of the translation. Important Note: This work is owed to the ?Encyclopedia of Multicultural Psychology?, published by the ?Sage Publications? in 2006. Please acknowledge this information if you are to use this work for any of your writings. Thank You. -A.W. ...read more.